More and more, I get the feeling that every cliché uttered by Michael Haskins on his dreary morning show heralds another day in the death of WBAI—indeed, perhaps Pacifica itself. The process has been slow, but, under the alleged management of Berthold  Reimers, it is accelerating to a point where some of us feel rigor mortis will set in this year. I thought 2014 would be it, but Reimers re-kneaded the dough while the PNB majority continued to look the other way. If a miracle were to happen, that, in and of itself, would be a miracle, so expect to hear WBAI's last gasp this year. The frequency will stay, but the few weekly hours of listenable radio will be silenced for good.

For "good" may be understood as meaning with Finality, a sad acknowledgement of the station's present advanced state of deterioration, or it can be interpreted as being to someone's Advantage, the beneficiaries then depending upon one's perspective. To the vandals—including the below pictured Mario Murillo, Dred Scott Keyes and Michael Haskins—the perceived benefit is a WBAI that fulfills their personal agendas and common goal of redefining "community" as a black, brown, largely uneducated populace with a bold stroke of likeminded  Hispanics. To others, the advantage of WBAI ceasing to exist is tantamount to air cleansing; the riddance of years of bad radio and the possibility for a better station emerging. There was a time when a "better" station could only mean a further developed WBAI, but now it would seem that any professionally operated radio station might constitute an improvement. 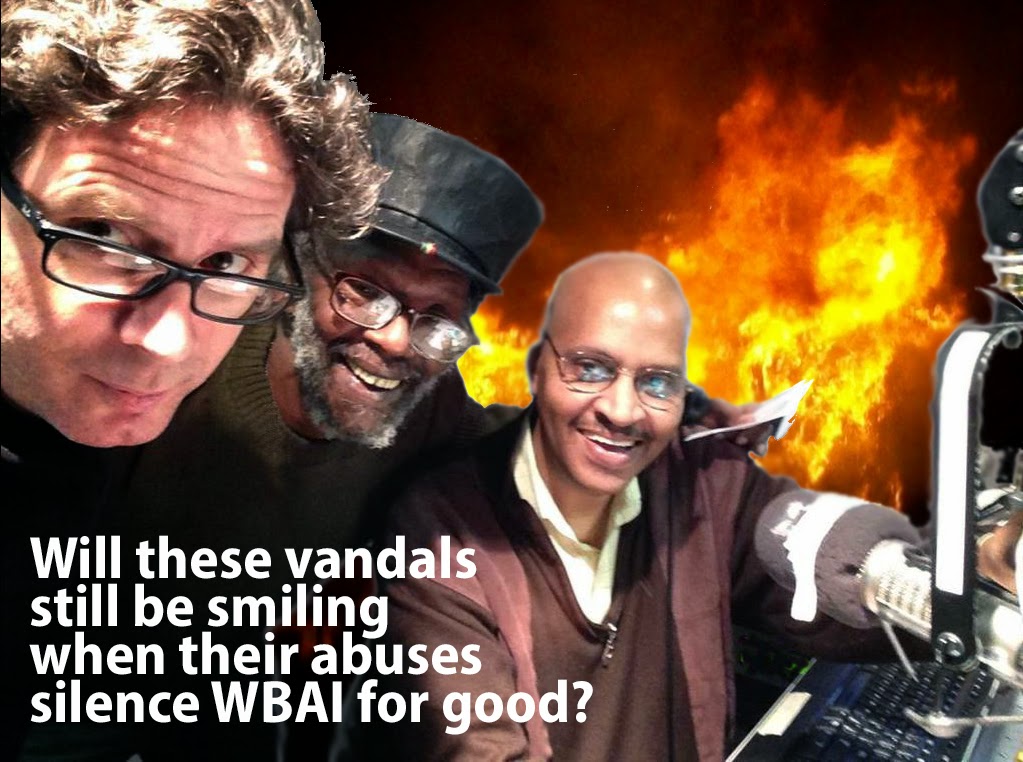 Once New York City's most significant radio station, a breath of fresh air in what FCC Chairman Newton Minow described as a "vast wasteland," WBAI has suffered the mismanagement of a "new" reshuffled Pacifica under a succession of unfit management teams. Several approaches have been attempted, most of them reflecting the personal agenda of a current GM or PD rather than the mission and principles upon which Lewis Hill established the Pacifica Foundation in 1949.

In recent years, management teams have seriously misjudged the audience as they chopped away at WBAI's ethnic and cultural diversity to narrow the focus. The station has become a doctrinaire political propaganda outlet where a fixed group of single-minded irresponsible people sag to a lower intellectual level as it redefines the term "community radio," making it a euphemism for vengeful black activism of a low order.

This has only resonated with a small, gullible faction of listeners—the choir preached to—which is unconscionable for several reasons, one being that the obsessive, vitriolic approach detracts from very real problems that affect us all. Another outcome unforeseen by these opportunists is that it has exacted a heavy price: the loss of an overwhelming majority of WBAI's once loyal listenership.

This translates into a major drop in revenue, necessitating—in the absence of improved programming—the airing of  multiple fundraising marathons that in recent years have taken on the form of endlessly rebroadcast infomercial that serve outside scammers well as a marketing tool for highly questionable "premiums."

The watering down of WBAI began several decades ago when self-serving "celebrity" wannabes saw a door left cracked by GM Frank Millspaugh and slithered in. His at-work drug use, lack of broadcast experience and rudderless "management" created a vacuum that two new employees, Larry Josephson and Steve Post, used to personal advantage. WBAI's open microphone was perfect for those who placed their own desires and need for attention before any concern for WBAI.

Although his importance would change in coming decades, Fass played an important role in the shaping of WBAI as a cultural barometer and soap box. The freedom Pacifica's broad scope allowed him to exercise on the air would later be dubbed "free form radio," but this was not an original concept as much as it was a natural cultural evolution. WBAI's ownership by the Pacifica Foundation coincided with the rise of a counterculture that had a new generation of Americans rebelling against convention, seeking new freedoms in many areas, including music. The so-called bubblegum ditties were pushed aside, jazz invaded the campus, and a pseudo folk music paved the way for a re-entry of age-defying pioneers whose careers were thought to be over. Commercial radio continued to play it pretty safe, but at 99.5 there was something for every thinking person, a spot on the dial where one could glimpse the future and savor the past.

Fass' live midnight show offered the most glaring departure from the norm. Its introduction preceded the advent of on-the-air telephone call-ins, so he played records and talked to his audience in an ad-lib style that owed much to WOR's Jean Shepherd. His taste in music and embrace of the post Bebop hippie sub-culture made him the ideal host, a perfect lure for young performers, poets, and other members of the trending anti-establishment movement. Our little studio on East 39th Street became the place to be if you had something unconventional to say or sing.

The Fass show was not Jack Paar nor Joe Franklin, but neither was it far removed from them. The difference was WBAI's inherent freedom of expression and lack of any need to serve commercial interests. Therein lay the station's broad appeal—WBAI did not aim its signal at any particular ethnic or age group; it clearly leaned more to the left than to the right, but not by design—the ideal overall political position was somewhere in the middle and the ideal listener-supporter was the independent thinker. Producers and commentators came from as many sides of the political spectrum as we could find among the willing, including the idiosyncratic Ayn Rand. It worked because the audience did not tune in to hear confirmation of set beliefs as much as it did to broaden its horizon. The same eclecticism applied to WBAI's literature and arts offerings.

Beyond the obvious low standard of its programming, WBAI has closed its microphone access to an invaluable resource: the extraordinary mix that makes up New York's population. It is madness to give permanent air time to a group of unmotivated, stagnant amateurs who have nothing of substance to offer, spread misinformation, and have the vision of a bat in the sun. This treadmill of tedium is maintained at the cost of fresh thought and energy from  that extraordinary talent pool we call New York City.

Add to that the ridicule WBAI is exposed to by the steady airing of make-believe "doctors", conspiracy theorists selling their self-published books and DVDs, inane disc jockey pop shows, pseudo spiritualism, empty rhetoric, etc. There was a time when changes could have the positive effect of keeping listeners interested, but those days are gone—there are hardly any listeners left.

A former PD who has cost Pacifica a great deal of money by filing a frivolous lawsuit and is known for engaging co-workers in physical combat, among other things, was banned from the station by a previous management, but has now been invited back on the air. That invitation came from the same management team that recently staged a trumped up charge against Sidney Smith, calling the police to the CCNY campus but never personally confronting Mr. Smith. The NYPD found nothing to warrant action on their part, but Berthold Reimers ordered a sometimes sledgehammer-wielding member of his "management team" to take Sidney's campus ID card, escort him off the premises, and inform him that he is "banned forever."

This happened last year and Smith—a 30-plus-year veteran of WBAI—has yet to receive any explanation. Reimers, on the other hand, was told by an angry CUNY official (the President, I believe) that WBAI must vacate the CCNY studio by the 31st of this month. This is the sort of irresponsible behavior one has come to expect from Berthold Reimers, whose skin was saved by CCNY when they rented him the studio at  $5,000 a month and—when he got a few months behind in the rent, allowed WBAI to stay anyway. Now Reimers has killed that relationship and nobody knows what will happen as the station becomes homeless again. Reimers claims to have had "engineers and architects" look at the Atlantic Avenue location and that a studio is being built there. He has had many months in which to find a solution, there is no money for sound-proofing, which is essential, and there is every reason to take this as yet another instance of Reimers fantasizing.

More details on this to come, but one has to wonder why the ruling Pacifica Foundation National Board faction has allowed this to happen?
Posted by Chris Albertson at 3:13 AM 119 comments:

Here is the 2013 Pacifica audit..... it is getting mixed reviews. Let's see your comments.
Posted by Chris Albertson at 8:09 PM No comments:

The Pacifica Board game continues...

As they claw at each other in the California AG's waiting room, audit is on their minds, but underhanded business goes on as usual.

KPFT's current PD, Ernesto Aguilar has written a piece for the non-profit online publication, Truthout. It is interesting to see how this self-proclaimed experienced writer skirts important facts and freely quotes one of the most unreliable sources at WBAI. It indicates his faction's mindset in this hour of desperation. The quotes from Berthold Reimers confirm his duplicity and the vacuum he operates in.

There is more to come on that, especially as it pertains to his moving fantasy and the lies that continue to drip from a forked tongue.

In the meantime, let's hear what you think of Aguilera's piece, which you can read here.
Posted by Chris Albertson at 2:50 PM 75 comments:

WBAI LSB Treasurer, R. Paul Martin, has issued his March, 2015 Report. I have marked the portion that directly addresses WBAI's situation. As usual, we find GM Berthold Reimers giving details that are at variance with the facts as others see them. Look into his eyes! 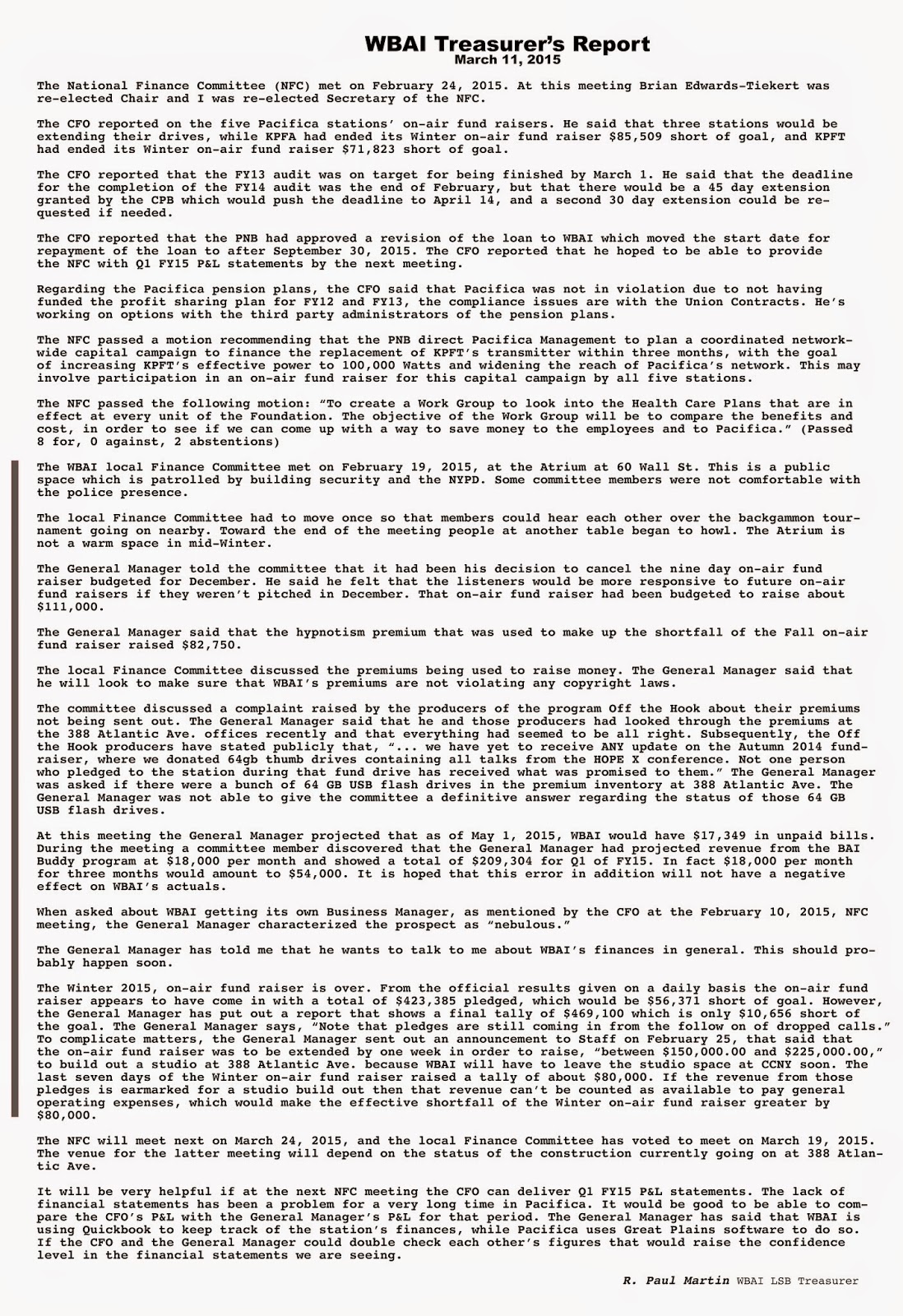