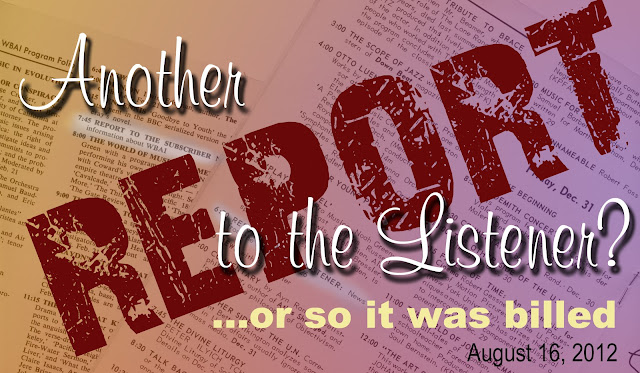 It was even worse than I thought it would be. Reimers came off as semi-articulate, but he had great news—WBAI has improved its financial condition considerably since he took over as the manager! And the sound of the station has undergone vast improvement, too, he added. But wait...there's MORE! The mood at the station is wonderful because he communicates with the staff!


Kathy Davis was equally delusional (insincere, actually). She feels new energy among the producers. She didn't explain why we, the listeners, don't get those good vibes, but she did throw in some typical blather about the management's job being" "protecting a mission that came before us." Of course, fund-raising listeners will forever associate Kathy's voice with a couple of major scams—most notably the "miracle" water.


Andrea Katz was all excited about the upcoming offer of a tote bag. She also spoke enthusiastically  of the "BAI Buddy" fundraising offer, which never got off the ground, and said she had been very busy applying for grants, but seemed rather perplexed by the fact that there are no takers. Perhaps these people actually checked out the programming. I would think the poor quality and fact-forsaken, hateful content of so many "shows" might give prospective grantees second thoughts.


Premiums coordinator Yvonne Singh was happy to announce that the double helix water product had finally arrived and will now be shipped out. There was no further mention of the helix scam.


Chris Hatzis, the new PD, who has been hard at work for two months without producing any discernible results, talked about having regular sessions with producer/hosts to assess their shows. I couldn't help but wonder if those responsible for the shows might not be the very last people one should consult. Those assessments should be made by Hatzis tuning in to the shows and discussing them with listeners before sitting down with the producers. Why, I'd like to know, has he not removed some of the decidedly awful programs from the air? How many months will it take before he does the obvious? The hope I had for WBAI's upturn in his hands has all but died.

Then there were the phone calls—quite revealing and mostly not well received. One lady, having sat through all the empty talk of this mutual admiration society, had a suggestion:

"Take off those rose-colored glasses, everybody" she urged. Then she suggested that a disconnect between WBAI's audience and the management probably accounts for the massive loss in listenership. She also advised that they (the assembled group) take a hard look at ethics.

Robert Knight made it obvious which calls he liked or disliked. He was quick to cut off a couple of callers who thought it might be a good idea to bring back Bernard White—and make peace, as it were, and he offered one suggestion of his own: that the $25 membership fee be increased. Does he really think that having to pay more will bring back the old listeners?

A caller wanted to know why Tony Bates was fired, and who made the call. Reimers said it had been a local board decision, adding (and here I paraphrase): "The one good thing about Tony Bates was that he would not allow internal problems at WBAI to be discussed on the air." He added that this made the atmosphere much better. There was, of course, no mention of the alleged signed petition, which was said to contain many  signatures

The gorilla in the studio was, of course, something rather huge that we can call "Denial," If callers had not pointed out how much the programming has deteriorated, that important factor would not have been brought up. Well, there was a vague reference by Hazis to a needed fix, but it was quickly fluffed over.

One alleged purpose of this program was to get listener feedback, but I guess that did not include criticism, even of the objective kind.

As usual, the group enthusiastically complimented themselves. Reimers was painfully defensive at one point, and Kathy Davis had anger in her otherwise sugary voice when she declared: "There's an effort afoot to destroy this organization from within." A lot of "propaganda," she insisted.

Thus ended a two-hour program of....well, propaganda. Lend it an ear in the archive (wbai.org).

P.S. I believe all the participants are salaried.


The following comment and video came from The Pacifica Maven, one of WBAI's many disenchanted listeners, who has contributed several intelligent comments to this blog. He makes reference to NJBF (New Jersey Black Female) another truly concerned listener who gave up on the station after many years of supporting it. I suspect that there are many former listeners out there who are equally disappointed, if not disgusted with the direction WBAI has been taken in. Here is the Maven's latest comment, which I am happy to post.

Cristina Rad is a brilliant (and very beautiful) woman from Romania. Her blog is usually about science, atheism, women’s rights. She often ridicules human stupidity as manifested by creationists, pro-life groups, Taliban of all religions, and bigots.However, when I watched this video I wondered if Cris had been reading some of my more mean-spirited posts.I think both Ms. Rad and my good sister from New Jersey may be making the same point: there comes a time when one just has to let go.In one of my first posts on Mr. Albertson’s WBAI blog, and also in one of my first posts on the blue board, I quoted what I think is a profound insight of Friedrich Wilhelm Nietzsche from his work GENEOLOGY OF MORALS:...the cause of the origin of a thing and its eventual utility, its actual employment and place in a system of purposes, lie worlds apart; ...whatever exists, having somehow come into being, is again and again reinterpreted to new ends, taken over, transformed, and redirected by some power superior to it; all events in the organic world are a subduing, a becoming master, and all subduing and becoming master involves a fresh interpretation, and adaptation through which any previous “meaning” and “purpose” are necessarily obscured or even obliterated. WBAI has been taken over and transformed into something I hardly recognize and which I don’t like very much. I guess the choice is whether to keep ranting about it impotently and bitterly, or follow the more mature, reasonable choice that NJBF has made.KCR’s morning music this week has featured Scriabin’s piano music which is almost never heard anywhere on the radio dial. KCR has programs on opera, gospel and Indian music, The African Show, Colombian music, music from Brazil, and Phil Schapp. Yes, I know he’s pedantic and tedious at times, but he’s done interviews with some of the greatest figures in the history of 20th Century music. And he does play some great music.There is life after WBAI.This will not be the last comment I post, but I will take seriously Cris’s admonition about being a hater. Thanks for the kind remarks, NJBF. And thanks again to Mr. Albertson for providing us with a forum for extended comments that are usually more interesting than the “tweets” and name-calling on the broken blue board.The Pacifica Maven