As Andrew Phillips sees/hears it... 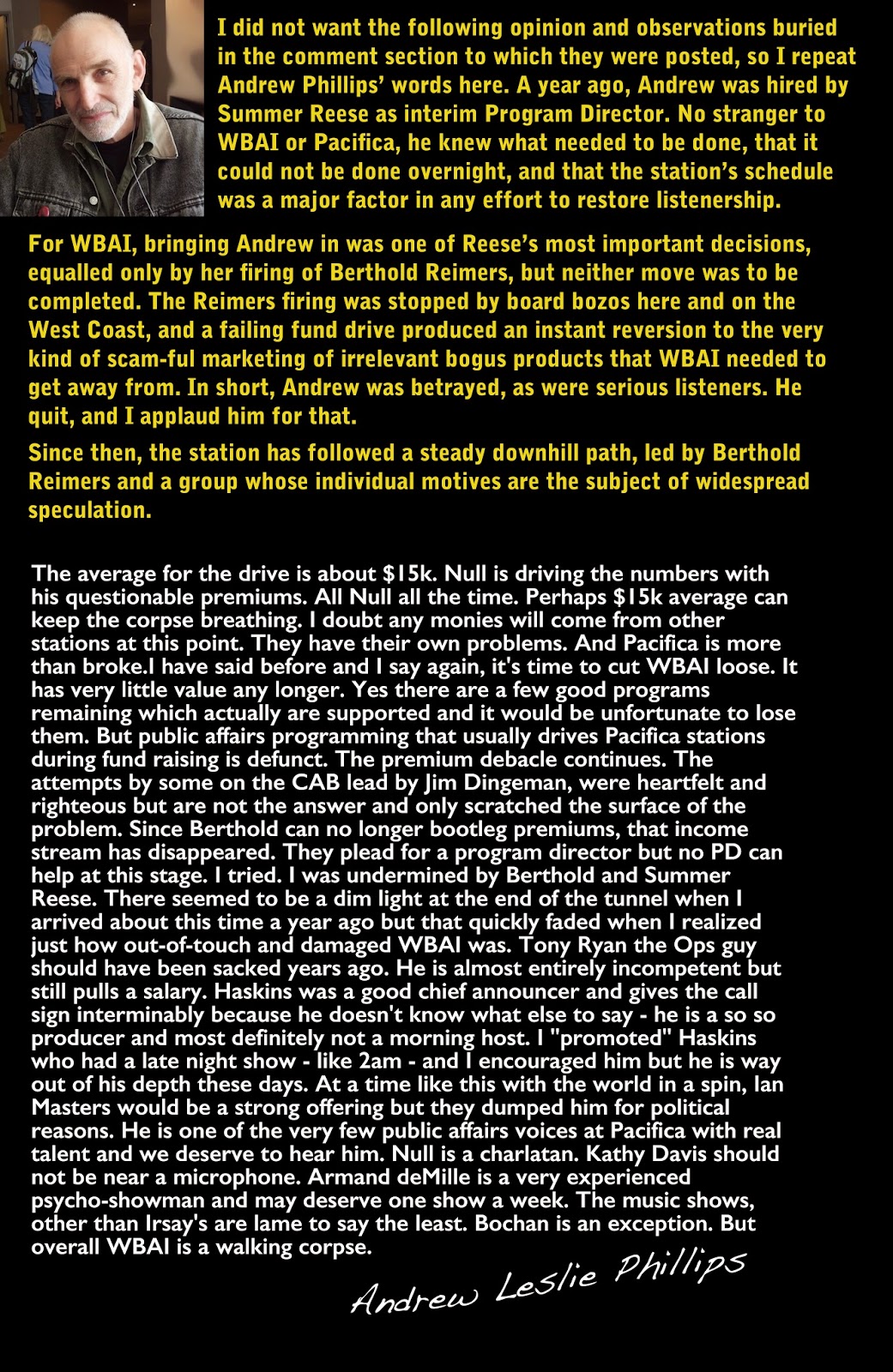 I am generally in agreement with Andrew here, but I would add Chris Whent, Joyce Jones and Through the Opera Glass to the not so lame music programs.
Posted by Chris Albertson at 7:22 PM 20 comments:

When a now occasional WBAI listener recently asked if Berthold Reimers, the station's appointed GM, is in the Witness Protection Program, few were surprised by his question. Never before in WBAI's 54-year history has a person holding that position been so tenebrous—yes,the station has often been rudderless, but there was always somebody in the front office who boldly (though sometimes, unwisely) showed a face.

It is probably not by accident that Reimers is named last and almost as an afterthought in Gary Null's executive roll call, which was a part of this morning's utterances from the station's rarely used confessional.

I need not tell you more, the aircheck really says it all. but I look forward to reading your comments on it.

Another vital Pacifica voice is stilled... 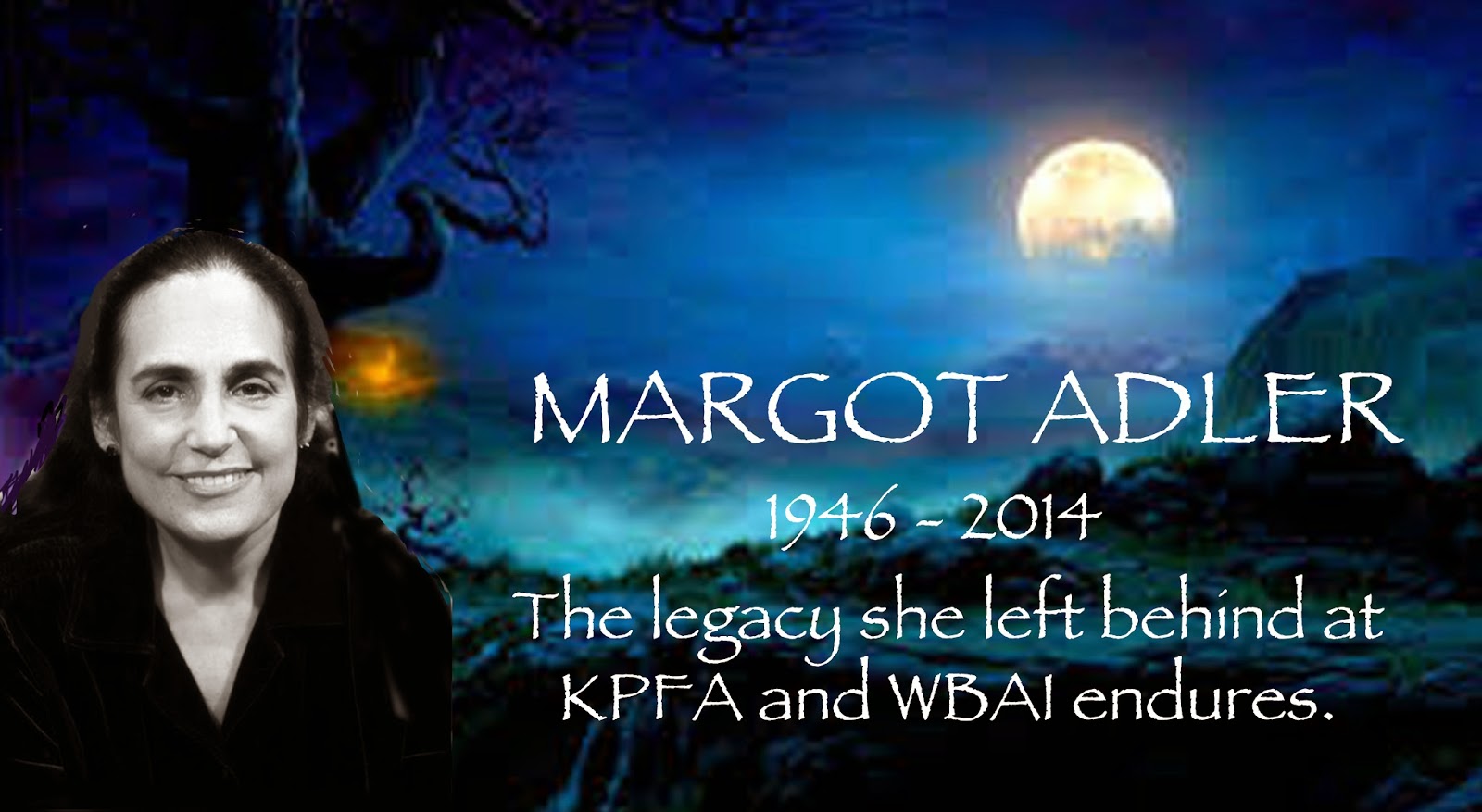 The Hour of the Wolf encompassed much that helped to shape WBAI, but the Pacifica era of responsible reporting and intelligent imagination is long gone. So, now, is Margot. We who knew her will miss the very fact that she was among us, even at a distance.

The following text was updated August 3, 2013 and now links to the latest marathon program schedule.

Yesterday, July 22, they kicked off the so-called Summerthon, having barely finished its Spring precursor. That one was extended, but it nevertheless failed to meet its goal. This one will be tougher for several reasons: Summer is traditionally the worst time for fundraising; there are even fewer listeners; the backlog of "premiums" was never eliminated; people are onto the game or just plain tired of it; the rent bills that were to be paid with money from the previous marathon have still not been satisfied (but the money was spent on other things); trust in the station and the future Reimers and his cronies see through their rose-colored glasses has largely dissipated.

UPDATE: This fund drive wasn't making it (what else is new?), so Reimers has extended it until August 10. One would think that excessive drive experience might have made this bozo and his amateur group better equipped to calculate marathon results in advance, but when one cannot see beyond the tip of one's nose...

So what miracle are these people expecting to see this time? Here is the August 4 - 10 marathon program schedule that currently is meant to put a cap this not-so-mini fund drive. You will note that it reflects the desperation and no longer attempts to maintain normalcy. As I predicted, Reimers brought out the worst of the past to fill the many slots marked as "specials." Even so, the result put but a dent in the immediate debt, so he has now escalated to the veritable deja vu orgy of scams and shameful solicitations many of us saw coming. Much of it is Null, Null, and more Null, which always leaves an intellectual void, but new scams have been added.

WBAI is now truly a commercial station with an intermittent sprinkling of amateur shows and a dash of good radio. It's a self-defeating approach that is meant to be a stopgap but actually brings WBAI closer to its ultimate collapse.

Blosdale is back with new hucksters and gimmicks, the unbearable Natalie has returned with her nuts, and hypnotism has been added to the menu, but these things only compound WBAI's outrageous trek into the tabloid world; already on the first night, Geoff Brady was interviewing a fellow nutcase and selling his book as a premium. Again, the amazing thing about his show is not so much that the guest are bonkers, as it is that Brady—who has been underestimating normal intelligence for many years on WBAI—continues to be in awe of utter nonsense. Here's an example from which, for the sake of brevity and purely humanitarian concerns, I have removed the direct sales pitches: 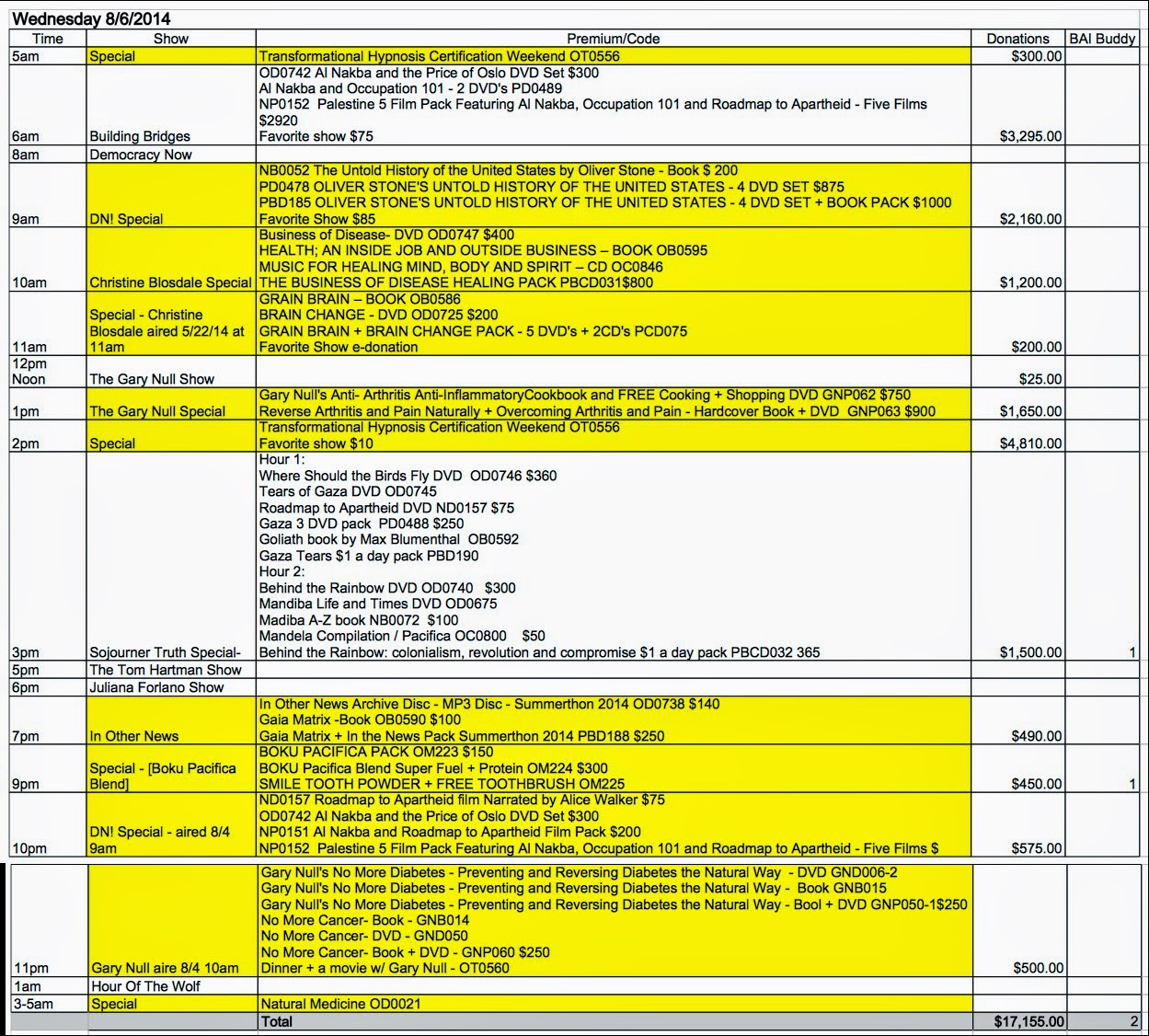 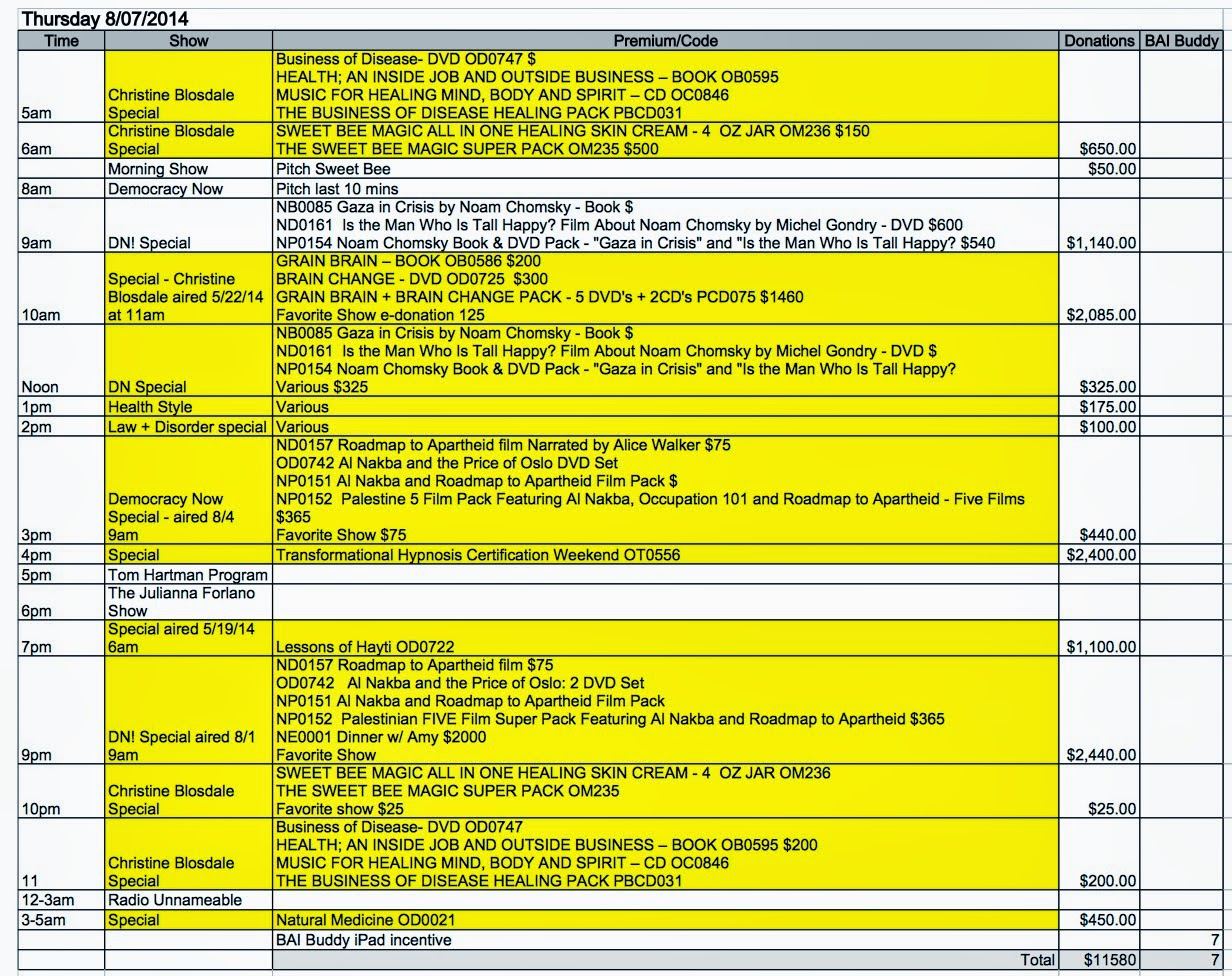 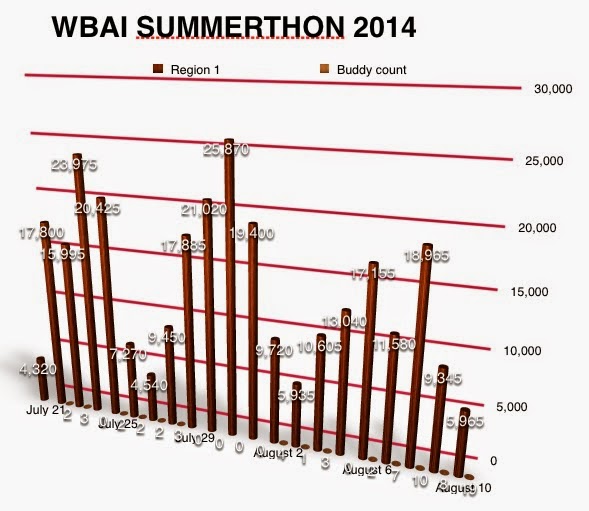 Pulling out of the station

As I have commented previously, I think the slow deterioration of WBAI began back in the late Sixties when an inflated Larry Josephson and Steve Post (the latter, pictured above on the right) took advantage of a limp station manager and introduced personality shows starring themselves. It was an alarming trend that turned out to have legs and eventually altered the character of WBAI, pushing aside some of Lew Hill's most significant principles. Post, incidentally, got off at the last stop August 2.

Today, several decades later, this assimilation of lightweight radio has all but eliminated the line that once so impressively distinguished WBAI from the rest. It has become a station that advances personal agendas, whether it be through political indoctrination, entrepreneurial endeavors, or narcissistic needs. Post mostly satisfied  his craving for the latter—he was not a dummy, he just played one on radio.

Michael G. Haskins (seen above to the left) is among the dregs left in Post's wake. He never knew WBAI as anything other than a dysfunctional remnant of the past, and he clearly still does not grasp its intended raison d'être. He is among those who wish to see the station go black—which it almost has—but he places that goal above any desire to reach an intellectual level, as if the two properties were mutually exclusive. Inarticulate and of shallow thought, Haskins lives in a fantasy world where WBAI is the people's station, a "family" waiting to be rediscovered by the "community". His blinders are firmly in place.

Some of us here in Pacifica's Eastern outpost have wondered how WBAI has been allowed to stay on a dead end course with clods of Reimers' ilk at the helm. Well developed Pacifica paranoia ascribes it to a power struggle liberally sprinkled with greed—a vague plan that exploits the dumbest of the dumb and perceives an advantage in failure. Of course, failure is not something that requires an effort to obtain when you have a radio station that replaces substance with selfies. The less paranoid simply attribute the steady deterioration of WBAI to amateurism, rationalizing that these people really are as dense as they appear to be. They are, but nefariously so.

Having been short-changed both intellectually and materially, most people no longer care what happens to the station. Collectively known as the lost listenership, they would probably agree with Michael Haskins' standard selling point: "Where else can you hear what WBAI has to offer?" The answer in most cases is, "nowhere," which speaks well for the much maligned New York FM stations and is an inducement to abandon 99.5.


The following audio clip of Haskins' "open phone" segment is from this morning's show. It contains several elements that illustrate why the audience is all but gone.

As for the unraveling PNB coup, stay tuned.
Posted by Chris Albertson at 10:53 PM 19 comments:

Posted by Chris Albertson at 8:47 AM 5 comments:

I apologize for the stagnation this blog seems to have suffered in the past few days. The culprit is a software problem that now is close to being fixed. In the meantime, it would be interesting to hear how the following reads on your crystal ball. On mine, viewed without the Reimers gang's rose-colored glasses, it does not look too promising. 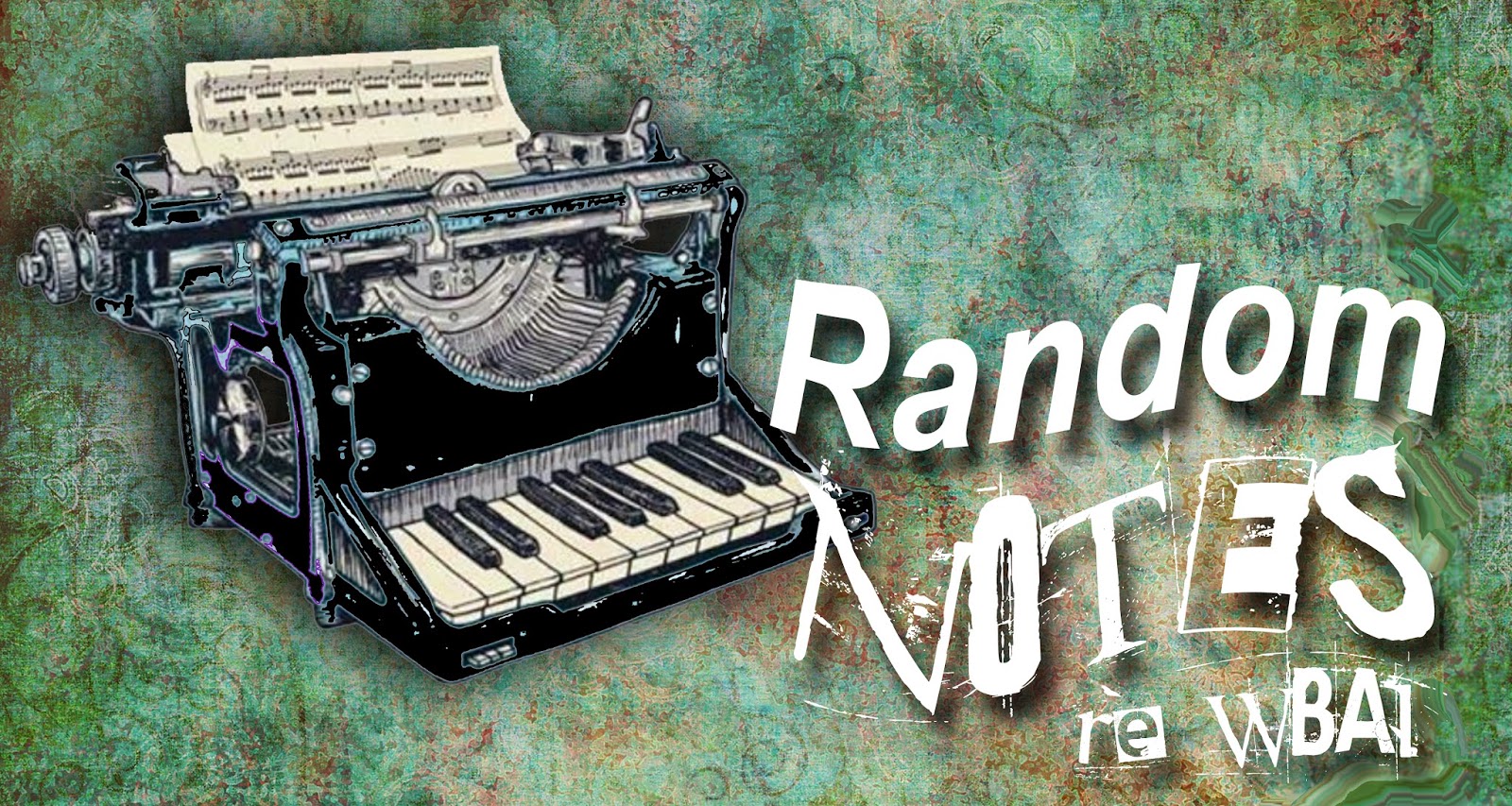 July 5, 2014-You may have heard the announcement of a Sunday morning shuffle that adds an hour to "High Praize", follows that with a 60-minute "special,"  and, at last, moves "Through the Opera Glass" to a reasonable time slot: Noon to 3 PM.

The original announcement of this deckchair rearrangement suggested that it was triggered by "Beyond the Pale"  opting out of the schedule. That is true, but why did one of the station's good shows no longer wish to be aired? I bet its producers were reacting to amateur Reimers' banishing the show to a mid-night limbo. That's what made Sheldon Walden exit in a huff a few days ago, so such shifts are not always detrimental to WBAI.

Apropos WBAI's ludicrous schedule, here is a parody from Sydney Smith's blog. He does not name the show in question, but were the sand in Reimers' head gold dust, I would not hesitate to bet it on "Where We Live," a single-minded seance conducted by Sally O'Brien.

That show, which is heard 3 times a month, does justice a disservice as it wraps itself in a rather transparent veil of Goebelbabble. That's my word for the kind of racist fact twisting that is currently prevalent throughout the station's shifty-cum-shifting schedule, starting with Haskins' morning amateur show. It is imperative to point out and cover the corruption that is tearing down what is so naïvely dubbed “the American Dream” and pushed as “democracy,” but Pacifica also has a mandate to tell the truth, to be honest with its listeners, and to not become a soap box for personal political agendas. Deceit and race-baiting only serves to put the protesters on the same side of the fence as those against whom the outraged is directed. I heard a rather disgusting exemplar of that today as "On the Count" had someone named Robin McGinty celebrate the Fourth with fizzling fireworks.

With so many current wrongs needing to be brought above the fold and scrutinized, spending hours and hours of air time rehashing (and embellishing) the grim, distant past may fuel anger, but it is a wasted opportunity.


Some of what McGinty, Sally O’Brien, and the other wrongheaded ideologues say on WBAI’s air has a basis in fact, but even when the truth is sufficiently outrageous to demand change, they find it necessary to lace it with lies and redirect it with omissions. Such calculated dishonesty is what propaganda is made of and it would not have been very effective in Pacifica's early years, but it riles up a dumbed-down listenership created by decades of unconscionable programming. It is why intelligent people no longer tune in, it is slanted information that ultimately does the cause of justice a disservice. This approach has defanged and all but killed WBAI, so one might ask why we should worry about a group of opportunists preaching to themselves? I think the real cause for concern lies not so much in what these people spew, because hardly anyone listens, as it does in their theft of New York's only true voice in the media wilderness. They earn our condemnation for rigging what Nat Hentoff once called "the only game in town."

Even the most savory peach loses its flavor when served in a sauce of compost.

More to come, but don't wait for me—I want this to be a singalong, so add your voices.
Posted by Chris Albertson at 9:46 PM 41 comments: