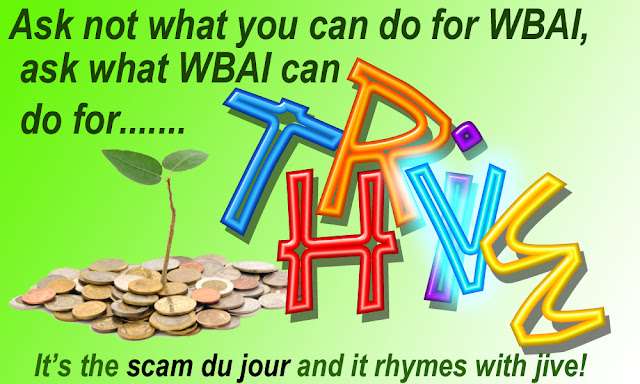 Early this morning, I heard another rebroadcast (complete with telephone sound effects) of the current fund-raising marathon's main scam du jour. It's a film called "Thrive"—and aptly so, because it forms the core of a thriving business. Bates and his sycophants are asking $80 for the DVD, a price that—he will tell you between stretched ripples of laughter—he had to "fight" for. He does not tell us whom he fought or whether it was to get it up or down, nor—of course—do he or his partners in scam reveal that the Amazon price for the same DVD is only $20 for an HD version and $5 more for the blu-ray. Five bucks is also what it costs to rent the movie, and you can stream it.

Sounds like they have their shit together, but you ain't heard nothin' yet. There is even an online store for their Thrive merchandise, and you will love the Thrive theme song, which you can download in video or audio form. Hey, the lyrics are yours for a quick click, so gargle and go for it! To visit the Thrive Store, go here.

Embroidered hats, coffee mugs, a variety of T-shirts, and DVDs in quantities—they've got it all. Or go here to pick up your very own promotional kit, to better help these people distance themselves from the 99%, pop in here.

If you think Tupperware™ parties were the cat's meow....  As you can see, this is a slick commercial business venture that plays on people's paranoia and easily won over a mercenary Bates and a gullible Davis. They went to one of the many Thrive screenings and apparently found what they were looking for: a new product with which to bamboozle what is left of WBAI's listeners. Tony and Cathy, that dynamic duo of deception, know that many of the station's listeners—having been dumbed down over the years—will fall for Thrive as readily as they themselves did (albeit for different reasons).

The Thrivers are more than mere merchants, they want you to think of them as a  "movement"—something like a well-endowed OWS on steroids—they want you to join in their efforts to make the world theirs. Well, something like that. To help you get that feeling of belonging and being a cog in their wheel, the Thrivers have devised numerous ways in which you can give them your money. Like Bates, they profess to hate banks (who doesn't, these days?), but are happy to take their credit cards. Hypocrisy? You bet, but hasn't that become a characteristic of the "peace and justice" "community" station?

I urge you to go to the well-designed Thrive site and explore on your own, but—for goodness sake—don't buy the DVD there or at Amazon, it's much too cheap and they don't even have those phone-ringing effects to give you a sense of urgency.

Seriously, the deceitful content of Thrive the film, and the disingenuous huckstering of it by Bates and Davis may bring in some money, but it underscores the moral bankruptcy of WBAI. That has not prevented Amy Goodman from making an appearance in a film—surely, she can see that Thrive is the embodiment of everything it purports to deplore and crusade against.

These people are out-hustling Gary Null! No wonder Reimers is keeping a no profile—he knows what he is doing to WBAI, so he shuns any credit.

Apropos credit, I wonder if we will be given any kind of accounting? Will we be told how much this one brings in? How much the Thrive people get out of the deal? How WBAI's cut will be spent? And how about publishing some details regarding these secret meetings that are supposed to determine the status of Tony Bates? He and Reimers remain a major liability. I won't go into Knight and the rest of the deadweight, because showing the current managing team the door should take care of that dross and—if we are lucky—other frivolous "shows".


Update: Knight and Haskins add to the disgrace:


Bates lackey Knight is now pushing the Swedish-produced "Black Power Mixtape 1967-75," a well-produced mix of Swedish Television footage from the '60s and '70s. This is an excellent compilation, tied together with narratives by actors and activists whose names will be familiar to you.

Knight is asking $100 for the DVD, but if that is more than you can afford, pick it up at Amazon for $12.49 (even cheaper elsewhere) or rent it for $3.99. He will not tell you about that—in fact, he will compound the deception by injecting such lies as: "The producers of this film have made it available to us so that WBAI can go on."That is pure deception, suggesting that this is an exclusive WBAI offer. Shame on him and his hypocritical claim to be spearheading a "new, improved" WBAI.

Add to that the fact that getting a paid-for premium sent to you from WBAI is a very iffy proposition as opposed to acquiring it from Amazon or almost anywhere else.

Like the perennial beat, the scam goes on at WBAI, a station that should be producing new documentaries rather than offering commercially available DVDs at
shamefully inflated prices. They know what they are doing, which is why they so glibly deceive rather than level with the listeners.

I believe what I am hearing now is live, but it will undoubtedly become an "encore performance," complete with theatrics by the oily Robert Knight and Michael G. Haskins, who appears to be a protegé of sorts.

It is a shame that such a worthy documentary is being exploited for monetary gain rather than presented to the listeners as part of Pacifica's original mission to edify.

Unlike the Thrive scam, this is a DVD that I highly recommend, and if you don't mind paying 8 times more for it (and having to pray that you will actually receive it), by all means call WBAI.

Personally, I think the Knight offer—on principle alone—should be rejected and a demand made that these charlatans, who systematically lower WBAI's standards to a previously unthinkable level, be made to start being truthful when addressing WBAI's listener supporters.

Submitted as a comment by an anonymous reader with a sense of humor, this was labeled "Here is Tony's latest pitch for WBAI's latest premium: