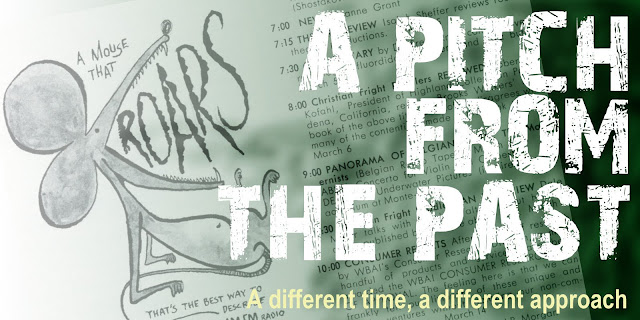 WBAI is in the home stretch of yet another fund-raising marathon, predominantly preying on listeners in poor health by unscrupulously selling them DVDs that make false claims of "cures" for diseases that, so-far, remain incurable. Another group of  targeted gullibles are sold DVDs of far-fetched conspiracy theories, often made by sensationalists in pursuit of attention and income. The hucksters will tell you that they aren't selling anything, these are "gifts", they say, "our way of thanking you for your support." What they don't tell listeners is that many of these items can be had elsewhere for considerably less money. Not only do they keep that to themselves, some will even claim that an item can only be had through WBAI—deliberate deception by a station that professes to stand for truth and justice.


Years ago, when we first started raising funds on the air, the key word was "honesty" and, on those rare occasions when we offered an item in return, it was something useful and pertinent. We also made sure that these items were actually received by the listeners who sent in money. Last week, I heard a caller tell Bob Fass that she never received her paid-for "gift," and that she had a very difficult time getting through to the station. When someone finally took her call, she was told that the item she had paid for was no longer available, so they sent her, as a replacement, something that she had no use for.


I will say that some of the items offered this time around are more suitable, but whether or not they will be delivered remains a gamble. The highly questionable, possibly illegal health "solutions" are still being plugged, some in endless re-runs and with an added sound effect  of phones ringing.

Current management and its cronies were sent to WBAI with a mandate to clean up the mess left behind by a succession of predecessors, but the new team was an ill-chosen one that has proved to be inept and irresponsible. Their attitude toward the listener-supporter is as unhealthy as some of the outrageous merchandise they are selling. I do not use the term lightly, for what we hear on the air are infomercials pitched with the same hype and intensity as their late-night TV counterparts.

I have been consistently critical of the current management and its treatment of WBAI and its listeners—a persistence borne out of a long-standing love for the concept that led Lewis Hill and others to found Pacifica in the early post-WWII years. Times have changed and Pacifica ought never to stand still, but neither should it abandon the basic principles laid down by the founders. These principles are as valid and important today as they were in the late 1940s, but the idealism that drove Pacifica in the early years has been replaced by personal agendas and egotism. I don't know about the other stations, but WBAI still has a core of dedicated people who fight an uphill battle to keep the Pacifica spirit alive. That was never more evident than recently, when two staffers took it upon themselves to give coverage to the Occupy Wall Street group. An event of global interest and importance was taking place down the street from the station while management was re-running time-worn, insulting money pitches. It took two or three weeks for the Manager and Interim Program Director to recognize the importance of this movement and see that it was exactly the sort of event Pacifica was made to cover better than anybody else. Now, they have finally done something about it, but it's too little, too late, and what could have taken WBAI back into the spotlight has, instead brought it more scorn. Management and self-serving hosts are now actually and shamelessly trying to take credit for OWS. Opportunism at its ugliest.

I apologize for straying, but I really find it upsetting to see a great concept so abused. Getting back to my initial reason for adding this post, I stumbled upon an unmarked reel of tape this morning, and it turned out to be an air check of one of my mid-Sixties jazz programs wherein I make a little pitch for support. It struck me that it was quite different from the ones we now hear on what seems to have become Gary Null Radio, so I thought I would share it. We did not offer "premiums" back then, but we occasionally found or produced an item that it seemed natural to offer. Whether it was a handy little radio, an LP of Noel Langley generously reading for us his delightful children's tale, "The Land of Green Ginger," or KPFK's Annual Annual, a publication that presented in magazine form the kind of enlightenment we offered on the air. We never targeted the easily persuaded, we didn't have to, because our listeners tuned in to hear a station that told it like was and made no attempt to bamboozle them. The fund-raising marathons we invented were annual events designed to meet immediate needs, but the money we received always exceeded the amount pledged. Lew Hill dreamed of an alternative station and that is what we were, in the true sense of the word.

After all that, it almost seem dumb to give you an audio example, but here it is:

Posted by Chris Albertson at 2:59 PM No comments: