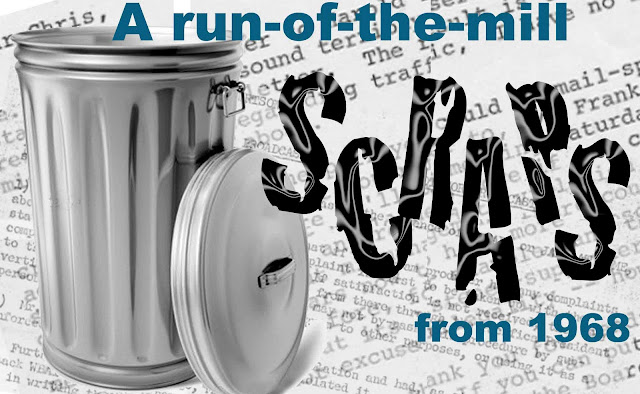 Some of you may have seen The Last Scraps a post from September wherein I explained how I ended my on-air association with WBAI by telling a few truths in a 15-minute spot that normally would have held a montage-type weekly program of that name. That night, I put aside the tape and talked about some disturbing activities that were taking WBAI off track (sound familiar?).  If you wish to read the Last Scraps post, click here.

Here is a program from 1968 that's more representative, if somewhat dated (this was one of the  Vietnam years). A silly montage with no redeeming qualities, but people seemed to like it. I did not have an audio mixer at home, so I used separate—sometimes overlapping—stereo channels, which is far from ideal.

Posted by Chris Albertson at 12:49 PM No comments: 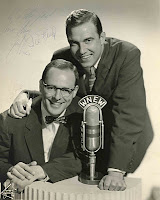 When I left WNEW to join the WBAI staff as an announcer, the station's popular morning duo, Klavan and Finch, made what was probably the only mention of WBAI on WNEW. Part of their show was an ongoing routine in which Gene Klavan (who replaced Gene Rayburn as Finch's partner) played various characters based on staff members. He gave me a Swedish accent, as you will hear on this aircheck fragment from December 28, 1963. Notice the Coca Cola prices. It's hard for me to imagine that this was close to fifty years ago. Gene Klavan and Dee Finch are gone now and WNEW is a very different station.

The man on the phone told me that he was producing radio spots for airing nationwide during National Radio Month—would I, as the manager of WBAI, be interested in submitting to a brief interview for one of the spots? I said, sure, thinking this could bring us some publicity.

A few days later, he showed up with a couple of audio engineers and equipment. Our studio was in use, so we found a quiet office and—after they had recorded some ambiance (room noise)—we proceeded with the interview. "Call me Hugh," he said. I thought that was a bit odd, for he had introduced himself with another name, but if I could be "Uncle Chris" on my Saturday night program, I guess he could be Hugh.


I had forgotten all about this when my secretary, Joan Henry, brought me my morning mail and pointed to an LP that she had unwrapped. "This looks interesting," she said. It was not only interesting, but unpleasantly surprising. I had been duped by the U.S. Army—they had the manager of a pacifist station participating in an Army recruitment radio spot! "Hugh" turned out to be Hugh Downs, whose voice had been cut in as the interviewer. Downs was quite popular at that time, having worked as a network game host, talk host, and anchor (the real thing), but this
deception brought him way down on my list. I decided to talk about this on the air and apologize to our listener-supporters for having been so naïve.

I don't know how many stations this ran on, but this was during the Vietnam era, a time when commercial media worked hard to demonstrate their patriotism. There is no way that Mr. Downs was unaware of WBAI and Pacifica, so I had to assume this was a deliberate "mistake."


Here's how it sounded: 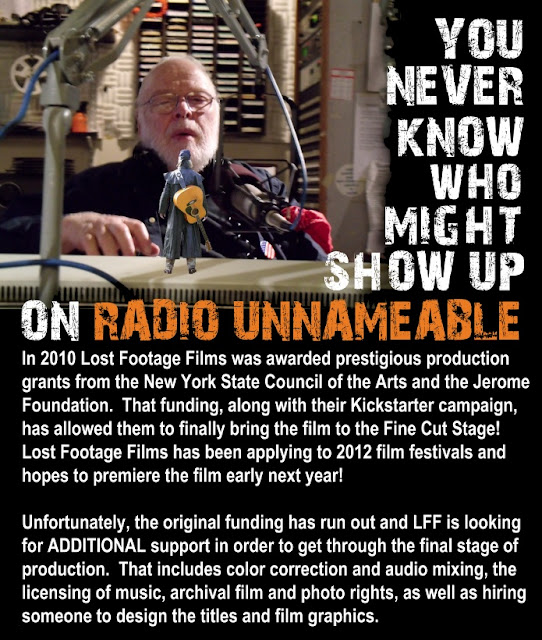 There is no need for me to tell you who Bob is or that Radio Unnameable is often Radio Unbelievable, and always Radio Unpredictable. Think, too, how this film will bring attention to the station you love. Here is more information about the project.   You can contact the filmmalers, Paul Lovelace and JessicaWolfson at lostfootagefilms@gmail.com
Posted by Chris Albertson at 5:29 PM No comments:

Today I heard Corinne Furnari and Tony Bates lay it on thick in their ongoing, shameless efforts to deceive WBAI listeners. You don't have to know anything about either of these two characters to detect the sleaze in which they wrap their pitches.

Furnari, of course, was the idiot who gave Kevin Trudeau—a certified, convicted scam artist a long interview last year (or was it this year?)—birds of a feather... Trudeau has been imprisoned and convicted of larceny and credit card fraud, among other crimes, and fined millions of dollars for making fraudulent claims. My worry is always that WBAI might lose its license or be fined out of business for the fraudulent claims routinely made by Bates, Furnari and others during the infomercials that are passed off as fund raisers for the station. Trudeau, who has spent time in prison.

I doubt if Bates or Furnari will bring Trudeau back, having learned something from the hue and cry his last appearance generated—but they continue their barefaced deception as they milk the listeners to pay for mismanagement. It is regrettable that Reimers (who obviously approves of this), Bates, and the rest of WBAI's morally bankrupt crew have not been stopped by Engelhardt or


the Pacifica Board. Add to that the sad truth that only a small number of people who are connected with WBAI have spoken up against it and you get a gloomy outlook for the station's future.