Thanks to Kevin White for pointing to this piece from the December 19, 1959 issue of The New Yorker on the occasion of WBAI's rebirth as a Pacifica station. Let's hope that it's not too late for another one.
A Response received December 24, 2012.. 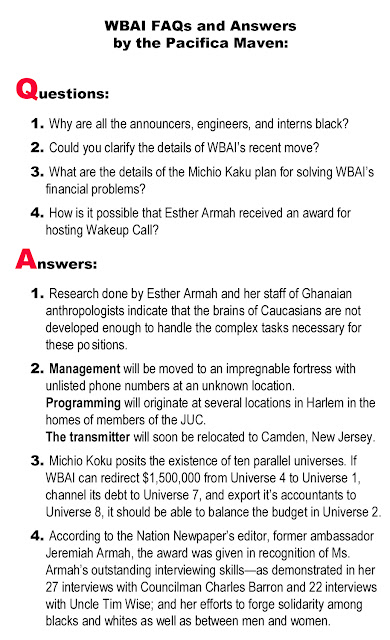 Posted by Chris Albertson at 1:32 PM No comments:

Are these your "BAI buddies"? 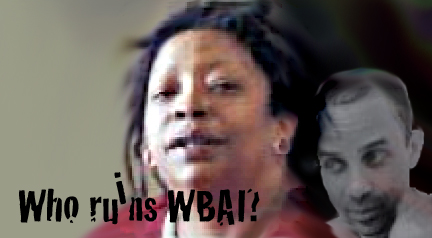 Posted by Chris Albertson at 11:08 AM No comments:

Can you pass the GM test?

If you have been listening to WBAI for a few years, you may have noticed that it is now a very different station from the one that originally attracted your attention. The programming has changed, and that is to be expected, but it has also deteriorated, and that should not be happening. WBAI used to operate on a high intellectual level, whether it was broadcasting music, commentary, drama, documentaries, comedy, or discussion. The people who worked there were dedicated to their job and excited by the very concept of voluntary support from listeners replacing commercial sponsors. This gave Pacifica stations the freedom to broadcast the truth, regardless of how controversial it might be. One could tune in to WBAI and hear intelligent, authoritative discussions on subjects that no other station dared to broach. There were unique performances of experimental music and drama, readings of poetry and monumental novels, and children's programs that left romper room far behind. You could move your dial across the FM band and you did not need a station break to tell you when it hit 99.5—even the announcers sounded human.

WBAI had about 25 salaried employees in the 1960s, when I worked there. You could make more money elsewhere—as I had, at WNEW—but only at the two other Pacifica stations (KPFA and KPFK) would you find such freedom of expression. Not everybody could get a job at WBAI—you had to be on the right wavelength, as it were. That has obviously changed, and when I listen to the station today, I hear much that never would have made it on the air in bygone years. To management and many of the station's hosts/producers, the listener is only important when the station needs to solicit contributions. No longer does the manager sit down and have a talk with the people who pay his salary—the weekly Report to the Listener was an important live program that gave the head of the station an opportunity to tell the sponsors what was happening at WBAI, who was working on a new program, what changes there would be in the schedule, how we were doing financially, etc. Perhaps more important was the fact that the manager had a golden opportunity to hear what the listener-sponsors had to say, what they liked or didn't like, what they would want to hear us do, etc. We were, after all, in the business of communication, but one would never know that today when phone calls and e-mail go unanswered, and the microphone is commandeered by tenured self righteous, mediocre producer/hosts who know that no other station will have them, so they hang on to WBAI for dear life.

You may not know how bad it has become, because you may be among the large majority of listeners who have gone elsewhere for intellectual stimulation and edification. Yes, WBAI is no longer alone in that respect, but instead of staying ahead of the game Pacifica invented, the station has been turned into a shelter for the stagnated and the opportunistic.

Kathy Davis and her pseudo feel-good vibes and Barbie doll philosophy would never have been allowed on WBAI's air when it was a principled Pacifica outlet. Ditto that embarrassing numerologist, the loosely wrapped fear mongers, the make-believe "anchorman," Robert Knight—who does not even come up to the standards of Fox News and the NY Post—the phony "doctors," the wannabe disc jockeys, the dusky dawn diva, et al. These are people who cannot see the station for the me me me's, but none of them would be loose to crawl around the station were it not for the spectacularly mis-cast and inept people in the front office. Berthold Reimers is as ineffective a general manager as anyone could dream up, and Chris Hatzis, the PD who was hired a half year ago, appears to be cut from the same mold—nothing at WBAI is going to change as long these clowns are in charge, even the downward trajectory is assured.

It's almost funny that a GM Evaluation Ad Hoc Committee has been trying to hold a meeting for a couple of months, but it keeps getting postponed. Today's notice read:

Security concerns? Hmmm, I didn't know it had grown that bad. Be that as it may, our astute contributor, The Pacifica Maven, submitted the following quiz today. I thought you might find it interesting—which answers would you choose? 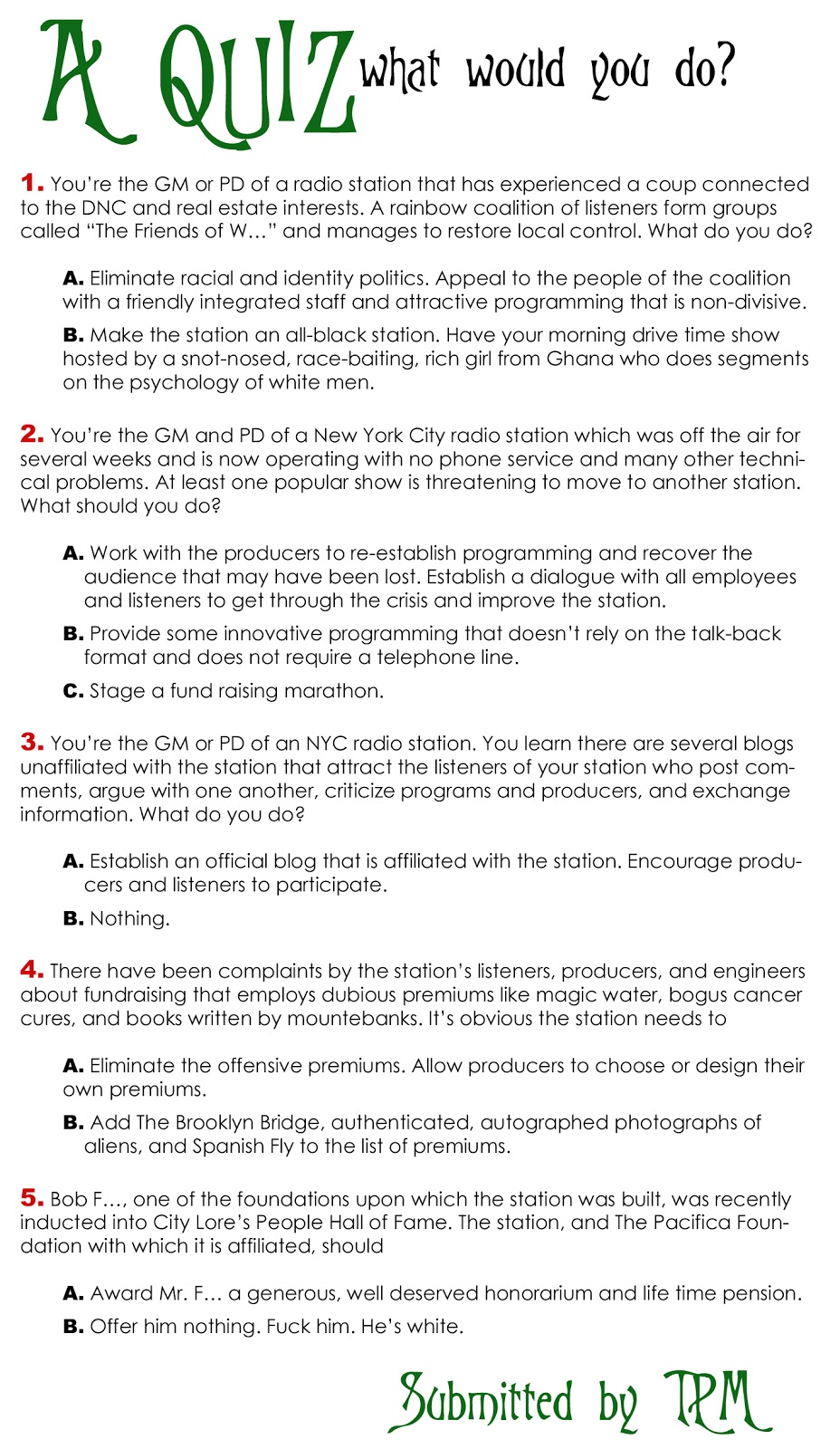 Posted by Chris Albertson at 12:56 AM No comments: