From a February 26, 2013 response to Tracy Rosenberg, posted on the WBAI-LSB public list by Steve Brown. His thoughts on what can be done offer a refreshing gust of reality and reason to those of us who have cringed and groaned through Frank LeFever's misguided ideas. I post it here in hopes of soliciting your comments. —Chris

Pacifica may limp along for a bit longer, but it will not survive because of a fatal flaw in its character – by which I mean its inability to stop doing things that don’t work. Many reasons have been advanced to explain this flaw -- incompetent management; arrogant staff; clueless board members; ideological rigidity; anti-intellectual bias; lust for power by some; unwillingness to relinquish power by others, etc. Choose your favorite reason, since all have played a part in the impending demise of Pacifica, sometimes one at a time, sometimes simultaneously.


In the past, those flaws didn’t matter (much). That was when money was easy, when as recently as 10-12 years ago, our “big three” stations could raise a million dollars in a short 15-day fund drive without breaking a sweat. Which meant that mistakes, false starts, mismanagement, poor hires, factional wars, embezzlement and outright theft (sometimes amounting to hundreds of thousands a year) – all could be fixed, patched up, or at least swept under the rug, as long as the money kept flowing. But the money is no longer flowing, and there is no more room under the rug.

Right now, at a time when declining audiences and shrinking revenues should prompt Pacifica and its stations to experiment with new ways to attract listeners and boost fundraising, they are still stuck in old ways that don’t work well. Not that those ways ever worked well. But as I said, for nearly 50 years, when money was easy and listeners had nowhere else to go for progressive content, it was good enough. But clearly, as the numbers show, it is no longer good enough.

We are not only losing listeners to the 26,000 progressive websites like Alternet, Huffington Post, Daily Kos and PRN (many of them streaming live radio) that now provide the same or often better progressive content than Pacifica. We are also losing listeners to mainstream (!!!) radio and TV programs like The Daily Show, Colbert Report, Thom Hartman, Rachel Maddow, Chris Hayes, the Young Turks, and many others.

To make things worse, we are not only getting fewer pledges during our fund drives (e.g., WBAI and KPFA are meeting only half their current daily projections, and less than a quarter of what they were getting as recently as 7-10 years ago), but we are not even collecting all the pledges we get. Currently, WBAI fails to collect 80% of its cash pledges, and our other four stations, although they collect more, still leave a significant amount of uncollected pledge money on the table each year – as much as $3-$4 million in uncollected funds across the entire network.

Which brings me to the latest instance of why I think that Pacifica is hopeless -- clinically brain-dead -- and steaming full speed ahead towards the nearest iceberg.

At last weekend’s PNB meeting in New York City, I had decided not to use the “open mic” time to tell the board (and the audience tuned to the live stream) how to save the floundering network. After all, I had been explaining how to do this for more than 12 years (9 of them as a WBAI board member) without having the slightest effect. But at the last minute, my old “save the world” reflex took over, and so – at least for the sake of the new PNB members, who may not have heard it -- I stepped up to the mic and, in my allotted 2 minutes, explained (for the umpteenth time) how Pacifica could immediately raise an additional $1 million during the next pledge drive, and as much as $3-4 million within the next 12 months – without spending an extra penny or requiring any additional network or station resources. (By the way, that is enough money to wipe out all of Pacifica’s debts and make it instantly solvent.)

So what happened after my 2-minute talk? If Pacifica were sane, and not brain-dead, the moment I finished talking, the entire board would have leapt to their feet, tied me to a chair, and fed me on bread and water till I explained exactly how to do what I had just promised.Did that happen? Nope. In fact, there was no reaction at all. Nothing. Not a flicker. Just ho-hum, yawn, who cares -- and let’s break for lunch.

Now, it wasn’t as if I were a barefoot Neanderthal who had somehow stumbled into NASA-Control and was attempting to advise its engineering staff on how to build a superior new rocket propulsion system for the next Moon launch. As many PNB members knew, I was the former owner and president of a $300 million dollar marketing corporation with three thousand employees in seven countries; as well the former owner of the second- (or maybe third-) largest telephone call center and fulfillment facility in the Unites States; and for over 25 years have been successfully advising progressive non-profit organizations such as FAIR, Mother Jones, Alternet, Free Speech Radio News, Progressive Radio Network, El Taller Latino Americano, and numerous others on how to raise money and increase their listener and subscriber bases.

Can an organization that is so blind, so blasé, and so clueless survive in today’s environment? Not a chance.

The following brief comment was posted by Mitchel Cohen—who, for reasons never adequately explained, has been banned from the Blue Board:

"For the record, I agree with everything Steve says below (except for his unnecessary attack on Neanderthals), and I feel similarly frustrated. And frustrated by WBAI management's lack of response, as well."  —Mitchel
Posted by Chris Albertson at 7:23 PM 2 comments: 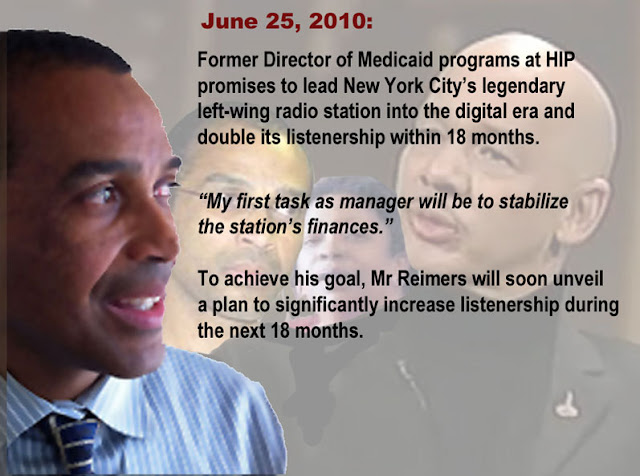 The 18 months came and went. Did WBAI's listenership increase significantly? No, it all but disappeared. Did Bumbling Berthold, the Botcher of BAI stabilize the station's finances? No, he knocked it further down with his ineptitude and delusions. Another 14 months have now passed, WBAI has sought refuge at a college station, its offices relocated to the opposite end of Manhattan, its transmitter location atop of the Empire State Building faces a serious threat of eviction for back rent. The stagnant program schedule that discouraged listenership and reduced it beyond measure not only persists, it has been made more unlistenable.

Why does Pacifica keep Berthold Reimers on?

I am not the only one seeking an answer to the above question. The following was posted on the Blue Board today by an unidentified WBAI listener (possibly a worker) who had just listened to Berthold Reimers' report to the PNB last week.  I suspect that many people wonder why such incompetent management is allowed to stay on, and what it would take to get rid of it.


Listening to Reimers talk I feel he told us much about himself. His tiny dig in “I’m from the Carribean were we buy not rent” meaning as in those stupid NYers who don’t. Well, let’s be honest not all Caribbeans buy, only those who come from wealth or have a good income. Obviously his family is not from the working poor, so how could he begin to understand the working poor in the US. Let’s be honest most people who come from other countries to the US come from wealth or very good incomes. It sounded to me like. He just seems to me justifying why he should keep his job, exaggerating a few positive points, like positive feedback from other networks.

What I find very troubling though is what I heard from some of the listeners. One woman standing up and saying when she looked at all the premiums she had subscribed to and saw that she had received very few. When Janet Coleman stood up and said she was representing the staff, and asked a fair question that Reimers never answered, I wondered who was representing the listeners, and was there anyone listening who was troubled by what the subscriber said, that she almost never gets her premium. To pitch a premium, COLLECT MONEY and not send it is fraud. What part of the word FRAUD do Reimer, Davis not understand.

Then Gary Null today, Tuesday Feb. 26th, was asked why he was not pitching. He said that when WBAI sends out the premiums from 5 months ago that he pitched and collected money on, then he would pitch again. Gary is right. Gary also said, that WBAI continues to insist on paying people they cannot afford to pay but does not send out the premiums on time to people who have paid for their product. Reimers’ priorities are messed up. There are 8 million people who would do a radio show for free. You can find producers to do radio for free. Why are you continuing to pay people to do it? But people who were promised a product and paid for it, need to be given that product. Otherwise trust is broken and it is DISHONEST. And there is an issue of lack of trust of this network from the outside.

But the big question is: Is anyone really in charge of the network or do they all just collect salaries and have meetings? If you are running an organization that is financially strapped, you don’t stab your customers in the back. You scale down to the bare necessities, antenna, operations, premiums, a station mgr. and engineers, a roof over one's head. But if Reimers does come from a substantial economic background in the Caribbean, he may not understand what it means to budget when you’re poor, and that's why he keeps making the wrong and crazy decisions. Don't get me wrong, I am not against immigrants or those who come here to better their lives, but I think it's time to hire people who understand the environment they are working in and to demand INTEGRITY from those who work for them and oneself. —Anon

Posted by Chris Albertson at 9:06 AM 8 comments:

Some thoughts on WBAI racism... 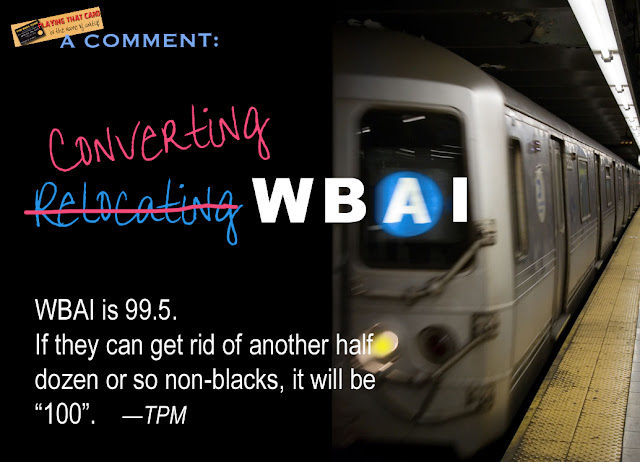 Posted by Chris Albertson at 2:58 PM No comments:

Who's moving where and when? 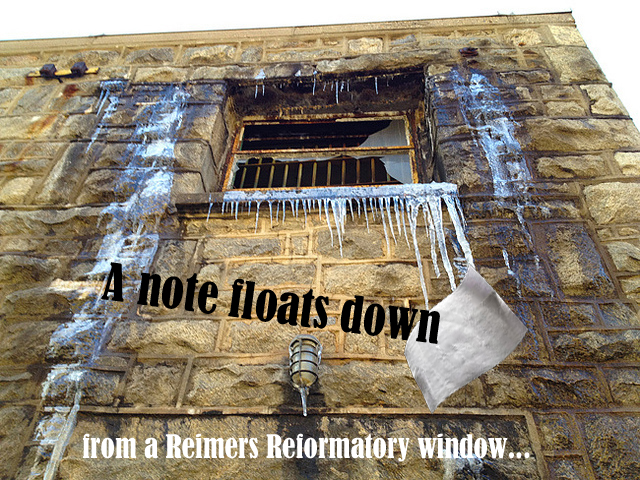 Remember when Tony Bates made his rash, disastrous schedule changes in 2010? We saw how utterly disorganized Reimer is when hosts showed up to do their program only to find out that it had been cancelled or moved. Some had been mistakenly told that their show would not be aired, so they didn't show up and something had to be substituted. It was chaotic, demoralizing, and no way to run a business, especially a radio station.


Well, now we have the move to temporary uptown quarters....or do we? Reimers has done it again. What has he done? We might say, nothing. Here's a note that gravity brought through the cold New York air this morning. It is from the formerly happy Uncle Sidney. 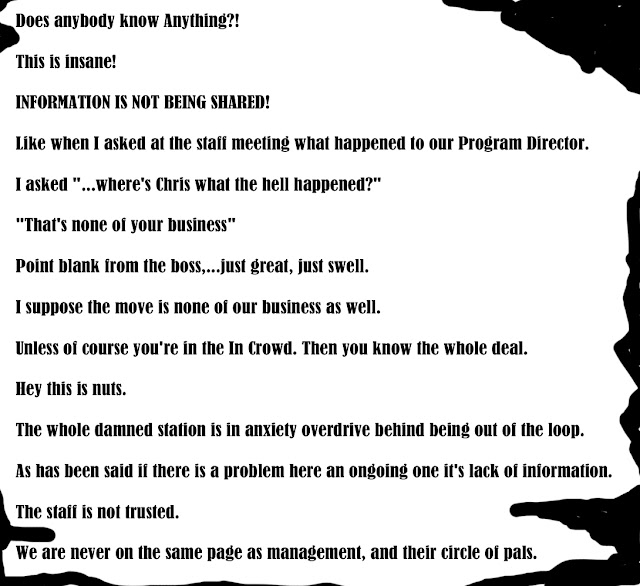 Your comments are welcomed.
Posted by Chris Albertson at 3:01 PM 1 comment: