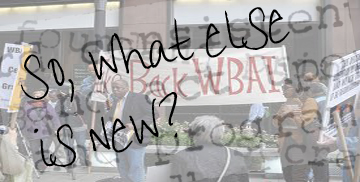 I guess it's an endless loop. Here's what was happening 43 years ago! (click on the image to make it readable). 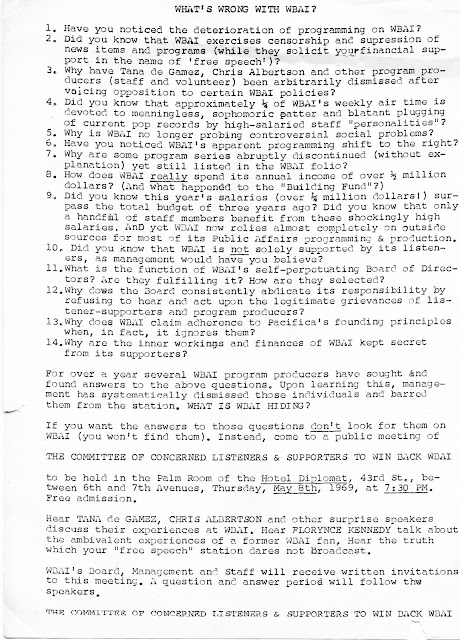 I have the entire Hotel Diplomat meeting on a tape that I am trying to transfer for posting.

I wrote the following in response to remarks posted by WBAI producer/host Sidney Smith on the infamous "BlueBoard". I post it here rather than there because that board is infested with disruptive elements who—for selfish reasons—blindly support the current WBAI management. These are people who have nothing to say, but say it anyway, especially when they feel discomfited by a post such as the one below. They know that I do not accept frivolous comments on this blog, so they wisely limit their access to reading. If you wish to read Sidney's post on the Blue Board, here's a direct link.

As I understood it, GM Berthold Reimers (the elusive one) and Bates (the amateur PD) were installed at WBAI by Pacifica with a mandate to clean up a mess created by their predecessors. Have they done that? Sidney Smith and others have on more than one occasion mentioned that thuggery has gone down and WBAI workers are no longer in physical danger (at least that is what they infer), but has this bumbling, clueless duo not placed the station itself closer to extinction? I think so. The foundation upon which WBAI, the Pacifica station) was built is a set of principles and guidelines that were realized with the creation of KPFA. At WBAI, those principles began to erode in the late Sixties when a mescaline-using GM (Millspaugh) let a couple of opportunists, Steve Post and Larry Josephson, loose. They fed their egos by instituting "celebrity" shows and thus radically changed the station's character.

As far as listener-supporters are concerned, what goes on inside the station—staff combats, backstabbing, etc.—only matters in so far as it affects what they hear on the air. If you replace Busoni and Brecht with bubblegum and blather, profundity with propaganda, you do not create dead air—at least not literally—but you do trigger a radical shift in audience. That has happened over the years, as standards were lowered to satisfy the less demanding.

Has the de-intellectualizing of WBAI worked? It would appear not, and one reason is that its listeners no longer see the station as a beacon of truth shining through the hype. Given the mindset of the time we live in, the shortened attention span, the Foxification of mainstream media, etc., and with materialism approaching the max, one might naïvely (and not unreasonably) assume that taking WBAI to the Murdoch Mall would expand its listenership and heighten the ring of cash registers. That has not happened, except during the ever more frequent fund raising "modes." Raising the standard of broadcasting does not seem to be an option anymore, so the bills continue to mount and listeners are subjected to more shameless infomercial-like marathons delivered with increased fervency and rebroadcast endlessly.

The bulk of WBAI's present income is derived from these marathons, which amount to sales of DVDs and booklets—the so-called "gifts"—thousands of which were paid for but never delivered. The way they are treated on the air, one would never know that WBAI's listener-supporters are its lifeline—the stockholders. Compounding the callous treatment of its supporters is the disfigurement of WBAI's image and, indeed, the jeopardy into which its broadcast license is placed by the nature of these "premiums," some of which qualify as outright fraud and teeter precariously on the edge of legality. DVDs claiming to hold "cures" for cancer, AIDS, leukemia, and other as yet incurable diseases are offered to unsuspecting listeners who obviously feel a need for them. The pitches—some made by members of WBAI's management—cross the boundaries of any enlightened society's moral and ethical standards. These "medical miracles" are the most offensive offerings, but there is also an emphasis on "documentaries" that purport to prove a variety of conspiracies—mostly in connection with 9-11—and are rife with misinformation. This is the stuff that inevitably find its way into tabloid gossip sheet adverts.

Note that WBAI's most aggressive hucksters rarely, if ever, suggest that listeners should send in money to support the station itself, the freedom of speech and unfettered enlightenment that once was a Pacifica station's hallmark has taken a back seat to worldly craving. When the phones don't ring, anything goes—the unscrupulous don a fake halo and work the crowd with false claims of adherence to the principles they routinely mock. The astute listener sees through such dishonesty and moves on without buying a ticket.

Racism at WBAI may be more subtle than it once was, but it has not been eliminated. In fact, it seems to have found a more accepting audience. The slogans we hear these days are as empty as the product they are applied to. Years ago, when WBAI was referred to as a "community" station, the term was used broadly. This is the New York City area, a real "melting pot" of cultures and ethnic origins (to bring up a trite tag), but the common denominator is the city itself, an extraordinary spot that attracts some of the most remarkable thinkers and creative forces. It is simply too diverse to be regarded as a community in the most common sense of the term, but it is an area in which many communities thrive. The be a "community" station, WBAI would have to narrow its focus, which some current insiders claim is what happened under previous management, mainly that of Bernard White. The station not only catered excessively to the black community—they say—it did so with a unbecoming militancy. Has that changed? Yes, to a degree. The station is still predominantly black-oriented, but whatever militancy one once was subjected to has been reduced. New York does not need another black radio station, much less one that emulates what already is on the dial. One way to cater to all ethnic groups is to reach out to the intellectual community, which was the original plan. A radio station satisfying intellectual hunger was a daring new concept sixty years ago and it is only in recent times that Pacifica has been joined in that effort. That, however, is not a valid excuse for dumbing down—it should be  an incentive to take the next pioneering step.

To varying degrees, intellect is something we all are born with, but not all of us find a need nor do we have the capacity to develop that gift. Lewis Hill believed that only through mutual understanding of our cultural differences and broad knowledge of the world we share could we prevent another war. It was when he surfed the radio dial and heard what broadcasters were offering their post-war listeners, that he realized the need for alternate radio, a spot on the dial where one could hear the truth, a place open to people who had something vital to say but no platform from which to express themselves. He saw this dream station as an outlet for free exchanges of ideas by seasoned thinkers as well as fresh voices—a place where the arts could find an outlet, a testing ground, and an audience.

It was to be a platform for contrasting ideas and bold creativity, a station that sought to satisfy the curiosity that fuels imaginations and leads us in new directions. Utopian? Certainly, but it was not the impossible dream. For awhile, it really worked, but it eventually—and, I suppose, inevitably—attracted less idealistic people, those who saw not so noble opportunities in Pacifica's open microphone concept, and seized them to further themselves or their agenda. I need not say more about that, it is all too evident to anyone who gives today's WBAI a more than casual listen.

Putting aside the baseball bats means nothing when the station and all it once stood for continues to crumble in the hands of leeches and sanctimonious opportunists.