It is but a faint shadow of all that. Coups and corruption have scarred WBAI, attracting an element so far removed from its noble aims and early accomplishments as to be unrecognizable, except for brief, scattered moments of intellectual stimulation.

These moments, dwindling even further, kept WBAI on the ground level of good radio for a remarkably long time, but the jaws of ineptitude kept chomping away, clearing a path for opportunists on every level. A new low was hit with the hiring of Berthold Reimers, a self-proclaimed savior who has failed the station spectacularly.

The WBAI that enters 2016 at midnight is a morally bankrupt radio station that bears little resemblance to the real thing. Rudderless, its bastardized hull floats aimlessly in a septic tank of deceit and imagined self-importance. It has no studio, no respect (self- or otherwise), no piggybank, no audience.

When it finally dawns on WBAI's misguided producers and hosts that they are preaching their propaganda and selling their bogus "gifts" to their own, they will come to the realization that this is indeed the end of the road.

A few former faithful listeners, staffers and volunteers still tune in, but no longer to reach out. Now it is the incredulity of longevity that maintains their interest.

One former faithful who lost all hope after somehow enduring three or four years of WBAI's systematic decay, heard the exit of 2015 this way.

It will undoubtedly end in the new year—with a blend of whimper, legal action, disgrace and unfounded outrage—but there is not much left to lose, so sorrow will be reserved for the handful of stalwarts. Let us wish them well and hope that they find a station that recognizes their worth. 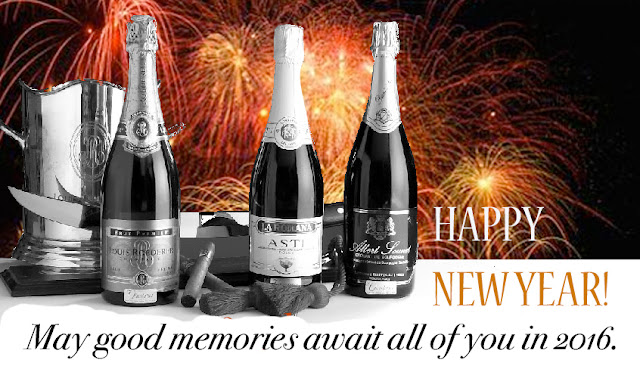 Reality Check: Things ain't what they used to be.

This morning, in the time slot Kathy Davis snatched just hours after Robert Knight died, she did her usual ever-so-boring routine, rambling on and on with her laughable ersatz "philosophy" before taking calls. The handful of regular callers appear to find her nonsense digestible and some even go so far as to thinking her profound, but this morning, reality struck this imitation guru.

A caller thought he heard Davis say something wise, but she couldn't recall what she said just minutes before, attributing that to a forgettable "stream of consciousness."

Beached and unable to catch that stream again, she attempted to wiggle out of this moment of truth. Here's the call Kathy couldn't deal with.
Posted by Chris Albertson at 1:11 PM 17 comments:

December 30, 2015
For Immediate Release
Rules Are For Suckers
Berkeley- Two national board directors nominated from Pacifica's 200 programming affiliate stations have become the latest victims in the Siegel/Brazon faction's machinations to keep a majority on the board in 2016 at all costs. Last week saw the nomination and appointment of a representative from Uhuru Radio, an Internet-only station operated under a Florida for-profit limited liability company called Burning Spear Productions. Uhuru Radio neither broadcasts nor distributes any Pacifica produced programming on their daily schedule. Last night, the board majority, over strenuous objections, appointed another uncontested nominee, this one from a station without any affiliate written agreement in place. In other words, nominated by a station that isn't an affiliate at all.

Pacifica's bylaws have this to say about the process:

Any Foundation "affiliate station" (as defined below) or any association of affiliate stations may nominate one or more candidates for the two Affiliate Director positions on the Board.

For purposes of this Section, an "affiliate station" shall be defined as any non-profit non-commercial broadcaster that broadcasts programming provided or distributed by the Foundation  pursuant to a written agreement with the Foundation, including, for example, community radio stations, internet broadcasters or digital broadcasters, as such technology may be developed.

As the first order of business, and given 30 days advance notice, at a Board meeting in December each year, the Directors present and voting (excluding any then current Affiliate or At-Large Directors from the vote) shall establish a protocol for balloting  using the Single Transferable Voting method.and shall elect two (2) Affiliate Representative Directors from the nominees submitted by affiliate stations.

To enumerate the long series of bylaws flouting by the board majority: one of their appointees was not nominated by a nonprofit, one was nominated by a station that does not broadcast or distribute Pacifica-produced content, neither has a written agreement in place, one hasn't for several years, 30 days advance notice was not provided, no ballots were used, single transferable voting was not used and two were not elected at the same time.

Affiliate directors are on Pacifica's board to address the network's Audioport program distribution system and relationships between Pacifica and affiliate stations that pay an annual fee and sign an annual contract as customers to access the system. That constituency can't be adequately represented if its only national board reps aren't part of the dues-paying customer base of the program. The affiliate program earns $250K- $300K in annual revenues to Pacifica's national office and in combination with SCA sideband rental fees pays the salaries of Pacifica's ED, CFO, and national accounting and tech staff.

A sample of the shrieking hollering meeting can be heard here (with all due apologies for the shrieking). The board majority doesn't even pretend nominee station (WMXP) is a current affiliate, settling for a weak "they were one before" and voting as a block to mow down any and all objections. Texas director George Reiter can be heard clearly stating the voice vote is out of order and several members point out that WMXP isn't even listed on Pacifica's on-line roster of affiliated stations, which can be found here.

The nominee for whom all the shrieking ensued, Efia Nwangaza, has a checkered history, both with Pacifica and in other ventures. As the board secretary, Nwangaza often hired outside contractors to prepare the minutes at Pacifica's expense, occupying the position on a mostly ceremonial basis. After leaving Pacifica's board in 2012, low-power station WMXP never signed another affiliate contract with Pacifica. The station itself was off the air in May of 2011, not returning to terrestrial broadcast again until May of 2012. The affiliated nonprofit, the Malcom X Center (Nwangaza is the president) was sold by Greenville County in a tax sale for unpaid back taxes in December of 2012 and had to be redeemed. Nwangaza is also an attorney and wassuspended from the practice of law for 9 months by the South Carolina Office of Disciplinary Counsel for misconduct in 2011.  The hearing in the Supreme Court of South Carolina cited four previous incidences of attorney discipline; private reprimands in 1993 and 1996, a public reprimand in 2005, and a previous finding of misconduct in 2007.

Nwangaza isn't the only Siegel/Brazonite vying for control of troubled Pacifica while having difficulty managing their own affairs. Board chair and current volunteer executive director Lydia Brazon, who describes herself as the Vice-President of Real Estate Directions Inc. presides over a real estate company suspended by the California Secretary of State. The Peace Center, the LA office building Brazon manages for real estate investor Aris Anagnos, is owned by the Aris and Carolyn Anagnos Peace Center Foundation which is alsosuspended by the California Secretary of State. The Peace Center's last publicly filed 990 tax form can be found here.

Technically until a California corporation corrects suspended status, it is prohibited from transacting business, filing a lawsuit, answering a lawsuit filed against it, closing an escrow, initiating litigation, or protecting and preserving its name.

The disarray in the outside dealings of many Pacifica board members and executive staffers is worrying given Pacifica's precarious condition and the complex and highly regulated business structure. Pacifica's history of compliance and administrative competence has never been particularly high throughout its long history, and has taken a free fall in the past two years. 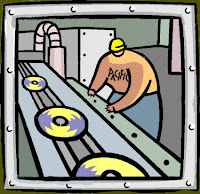 One of the persistent complaints about Pacifica throughout the years has been that stations have distributed unauthorized copies of unowned material as premium gifts to donors. Some suspect alternative health host Gary Null's pending litigation threats may be about piracy. (One way such an activity would work is that 50 DVDs of a copyrighted work would be sold as fund drive premiums. Instead of purchasing 50 wholesale DVD's from the licensed owner or distributor, only one would be purchased and then unofficially duplicated 49 times and sent to donors. After soliciting fifty donations of $100 each totaling $5,000, Pacifica stations would not purchase fifty $10 wholesale DVD's from the licensed distributor, but would only purchase one, send $10 of the $5,000 received, and keep the remaining $4,990 less the price of a package of DVD-R's).

There's no doubt unauthorized distributions have occurred in the past. In one large-scale example, both Pacifica California stations KPFK and KPFA sold hundreds if not thousands of bootleg DVDs of filmmaker Adam Curtis's series of BBC documentaries: The Power of Nightmares, The Century of the Self and The Trapbetween 2008 and 2010. The popular documentaries, which are not available in the United States, were purchased from a dodgy DVD duplicator who promised "hand-pressed factory originals". The vendor admits the product is a download on their website. Lengthy public domain discussions of the copyright infringement issue have existed since at least 2005 on sites as obscure as Wikpedia, where Wikipedia's Nick Cooper removed links on ethical grounds. A cease and desist letter was finally received from the copyright holder demanding the purchase and re-sale of the bootleg DVDs stop.

Pacifica's board elections continue until January 4th at WBAI, KPFK and KPFT. Members at those stations who haven't voted are encouraged to look for online voting instructions they may have received on October 22nd, or fill out an immediate request for them at elections.pacifica.org. Voters in NY, Houston and LA can also go to the station offices on January 4th to secure replacement ballots.

Pacifica in Exile's candidate recommendations can be found here.

Quorum *may* still be short by 90 votes at KPFK and 140 at WBAI, but there is no way to tell for sure. The reason quorum status is fuzzy is because elections vendor Simply Voting took a 3 week vacation from December 18th to January 4th and has not reported on the number of paper ballots received in the mail since December 15th. In the previously completed KPFA election, 40% of listener voters and 30% of staff voters chose to submit paper ballots by mail.

Whatever the actual gap may be, it could probably be easily made up by the aggressive playing of voter information PSA's through the duration of the election period.  Pacifica listeners say this is not happening. One KPFK listener monitored and observed that only Spanish language voter information carts were being played on LA station KPFK, with no English-language ones being played at all. Given KPFK's 50+ years as an English-primary station, it seems safe to say at least 50% of their members are probably not fully fluent in Spanish. Spanish language announcements are perceived by many at KPFK to skew towards support of the slate affiliated with board chair/ED Lydia Brazon, who is running for re-election this year for the fourth time.

If you value being kept up to speed on Pacifica Radio news via this newsletter, you can make a little contribution to keep Pacifica in Exile publishing during this season of giving. Donations are secure, but not tax-deductible. You may make a donation anonymously and/or in memory or honor of a Pacifica-related person of your choice and they will be notified (if we can track them down).

A RELATED LETTER FROM BILL CROSIER 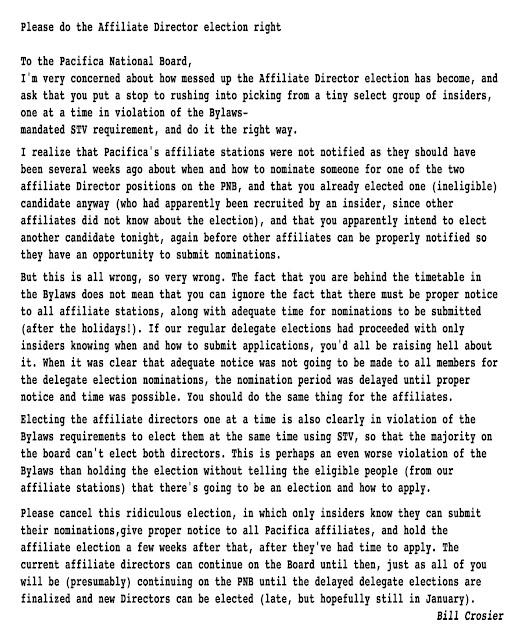 CLICK ON LETTER TO ENLARGE
Posted by Chris Albertson at 2:36 AM 9 comments: