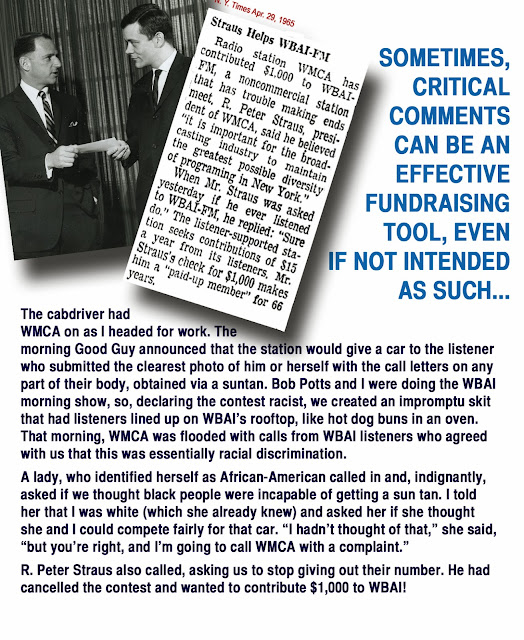 Straus, who married Monica Lewinsky's mother a few years ago, also took out two NY Times ads containing coupons for sending in money to WBAI.
Posted by Chris Albertson at 9:00 PM No comments: 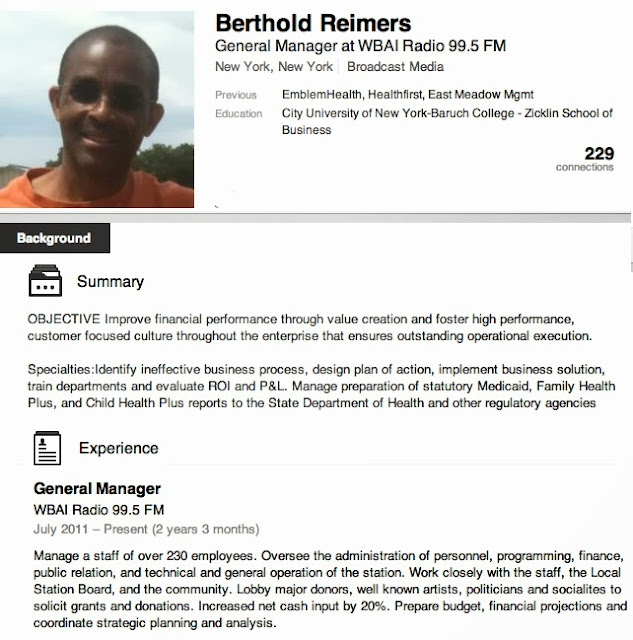 Don't even suggest it... 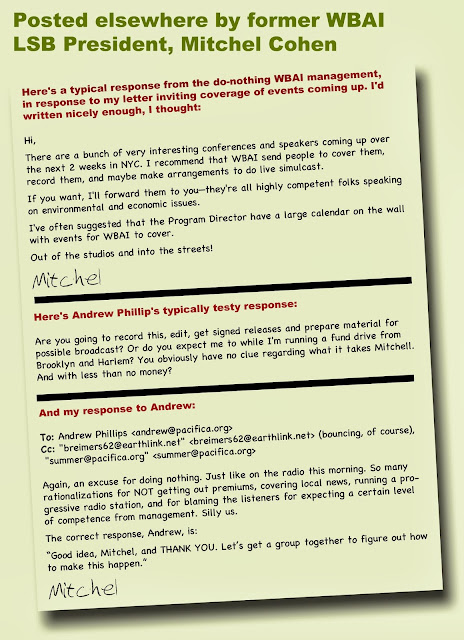 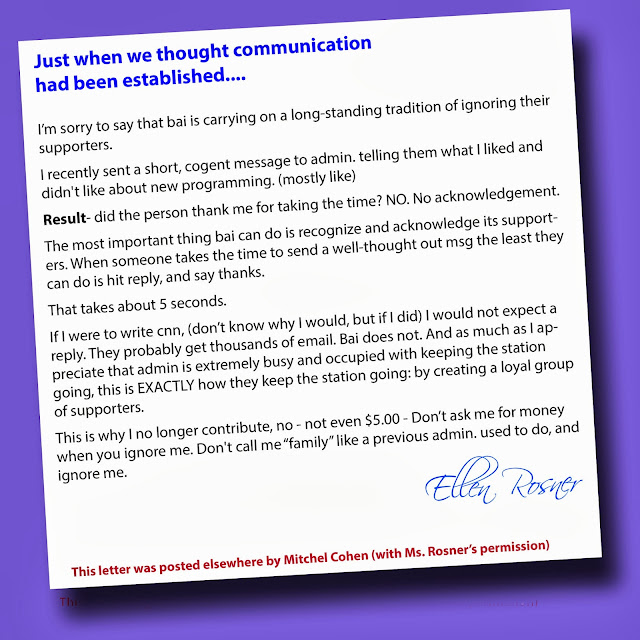 When no news is bad news...

Yes, Berthold Reimers, the whimpering, rarely seen GM arrived 15 minutes into the broadcast, as is his wont, and contributed absolutely nothing as he mumbled on about his "BAI Buddy" system and mentioned hurricane Sandy countless times. He still won't take responsibility for his own mismanagement, so Sandy did it.

The rumors that preceded this broadcast turned out to be empty, but those of us who predicted that nothing new would be discussed hit the nail on the head. There was no news regarding the programming, except by inference. A couple of callers pointed out how stale WBAI sounds—one noted the cavalier attitude hosts have when it comes to the listeners, another suggested that host/producers who abuse the station's air by plugging their own commercial ventures ought to pay the station a percentage of that money. Yet another caller felt that out-and-out commercials should be sold, and there was a call for Reimers' dismissal.

None of this was well received by Reimers and Phillips, the former just mumbling some more and Phillips skirting the issue, but admitting that the station's handling of premiums is far from acceptable.

What struck me was the absence of any real program assessment. We all know that WBAI has dumped such Pacifica inappropriate host/producers as Esther Armah, Robert Knight and Kathy Davis, as well as Hugh Hamilton, who was fast becoming a liability, but that was done under the purse-string tightening umbrella. The fact that the absence and/or near-absence of these hosts has helped restore the station'a image is not acknowledged by Phillips, although he surely knows that to be the case.

As Andrew Phillips connotes his dissatisfaction with much of the moldy program inventory he inherited, and replaces some of it with better shows from sister stations, he continues
to leave untouched such earsores as "In Other News," Geoff Brady's outrageously irresponsible fear-mongering weekly, and that numerology scam conducted by Z. Starman. I won't even go into the quack chorus led by Gary Null or the Ifé-Hooper-Ryan hours of Muzak-cum-hiphop BLS blandness.

I also found it disturbing that there was no discussion of the tremendous resource of talent New York City is, and how WBAI has left it untapped for several decades. In the early years, WBAI took full advantage of what great minds (in virtually every field) were out there and eager to approach our microphones. They were not out to make money on WBAI, they just wanted to avail themselves of a valuable platform for their thoughts and expressions. WBAI was a welcomed steppingstone to the successful future many of them would subsequently enjoy, so the truth is that lack of money is not standing in the way of the station's intellectual progress, egos, greed and complacency are the roadblocks.

If you hear this morning's report, please use the comment option (below) to share your opinion.
Posted by Chris Albertson at 10:46 AM 8 comments:

Wimper from under a desk?

One never knows...do one? With Reimers making one of his rare appearances, this time slot might attract more than the usual three callers.... perhaps as many as two new ones! Haskins will undoubtedly butt in to reiterate his name and tell the listeners that he appreciates so much their having tuned in to his community radio station...the one Bulgarian housewives and deceased (bottled?) poet/singer can't live without!

Andrew Phillips will also be there, so we might actually learn something new and pertinent.

RUMOR: There is a rumor going around as to the nature of this Report tp the Listener. According to sources that may or may not be informed, a new and somewhat desperate cost-cutting programming approach will be announced. There will, some say, be stronger emphasis on outside material, even to the point of eliminating local programs entirely. The idea of swapping 99.5 for a less advantageous signal is also being bandied about. The latter is not a new idea, nor is it senseless when one considers the years of waste inherent in  broadcasting humdrum, stagnant programs using great transmission power and a choice antenna location.

Of course, this may be but apocryphal hearsay, however—given the severity of WBAI's present situation—more drastic measures are called for and inevitable.

When I read the current posts in the so-called BlueBoard forum and—to some extent—on this blog, I sometimes wonder how many of us really want WBAI to rise again, and if we aren't being too pessimistic. It brings to mind Billie Holiday, a lady who in her final years could be a sad sight, her looks and voice ravaged by a lifetime of abuse—much of it self-inflicted. Yet, Billie continued to attract large audiences. Her voice, fragile as fine china, had lost much of its original character, but it was still unmistakably hers. Billie's delivery retained and, indeed, amplified the human quality that had always distinguished her performances, and many of us found her singing even more compelling in those years. Billie herself had grown cynical as her relatively short life ebbed out. Standing in the wings of Carnegie Hall at a concert celebrating the publication of her autobiography, she looked out at the capacity audience and remarked to a friend:

"They have come to see me fall off the damn stage."

I sincerely want WBAI to survive, but only if it can once again become the meaningful source of enlightenment Lewis Hill envisioned when he and his associates first turned on KPFA-FM, in the late Forties.

THIS JUST IN @ 10:20 PM, Tuesday: According to a source on the WBAI paid staff, Pacifica's Interim Executive Director, Summer Reese, has recommended to the Pacifica National Board leasing out the station for several years to the nonprofit that runs WFMU (a mainly music station in NJ) and WMFU. Another leasing offer being considered is from Manhattan Neighborhood Network, the public-access cable TV station. Both would involve handing over control of programming to these outside organizations in return for some level of ongoing payments to cover WBAI's operating costs.The Pacifica National Board will probably make a decision on this matter soon in a secret meeting (conference call). What is at stake is the very identity and integrity of a station that has been a vital voice of dissent for more than half a century. —Anonymous 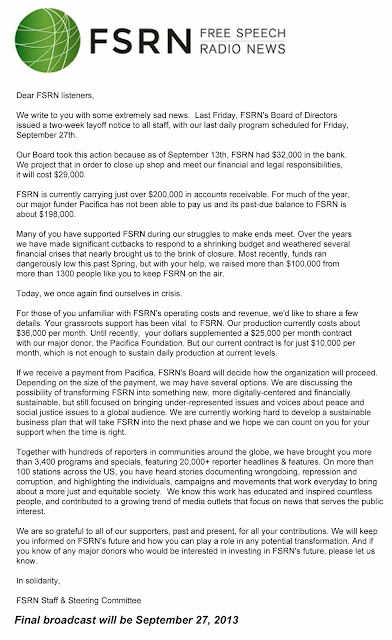 Since Esther Armah and Felipe were shown the door (the sigh of relief is still audible), there has been a lot of speculation as to who might replace them. Mr. Phillips has hinted that it will be someone whose name rings a bell, but no names were tossed about, so speculation was rife and some rather frightening names rent the air.

This past weekend, saw something more tangible floated about, a name that was brought up at a recent staff meeting: Karen Hunter. The following is taken from Ms. Hunter's Wikipedia biography, the link is here,


The first two paragraph tells me that she may not be too keen on joining the WBAI roster—if she does, I bet it will be a brief appearance.


Hunter served four years on the New York Daily News' seven-member editorial board. In 1999, she was a concurrent member of respective news teams that won the Pulitzer Prize and the Polk Award Prior to that she was the paper’s first African-American female news columnists; she joined the newspaper as a sports writer in 1988, then wrote features and business stories.
In January 2002, Hunter was appointed by the Hunter College administration as an Assistant Visiting Professor in the Department of Film and Media Studies and presently is a Distinguished Lecturer at Hunter College. She also was a morning radio talk show host for three years in New York City.
Currently, we have Michael G. Haskins making a fool of himself each morning—he hit the nadir this morning (Monday Sept. 17), but he'll take it even lower, I'm sure.
Who would you like to see occupy that morning slot? Leave a comment.

Solomon, a wise man, made an interesting observation in the BlueBoard forum. I hope he doesn't mind if I echo it here. After reading a cursory report on the aforementioned meeting, I had noted that I found it surreal that Kathy "Helix Water" Davis, our lady of the Homeless Angels, commented on the marathon premiums. Here is Solomon's response:

I thought it was interesting that Kathy threatened to sue. She would definitely seem to have a case because of how badly the layoffs were handled. If bai is paying Karen H or other replacement hosts even one penny it would be a gross violation of the contract with Esther. They can't just fire people who were in a union then hire people not in a union. Apparently Berthold was visibly upset and confused when he was told this by union legal reps. That man is fucking retarded. —Solomon

Here is a link to the minutes of the staff meeting:
Posted by Chris Albertson at 11:09 AM 23 comments: 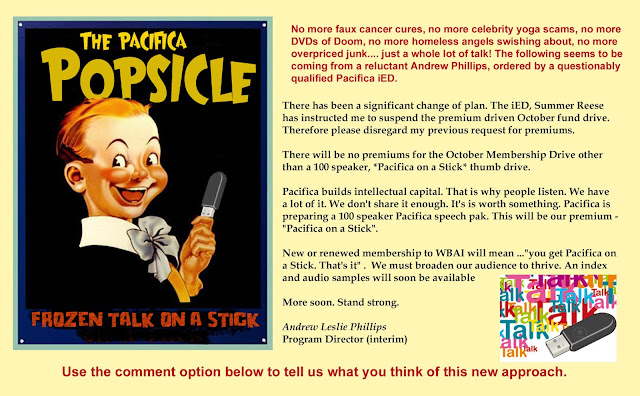 An internal memo from Andrew Phillips 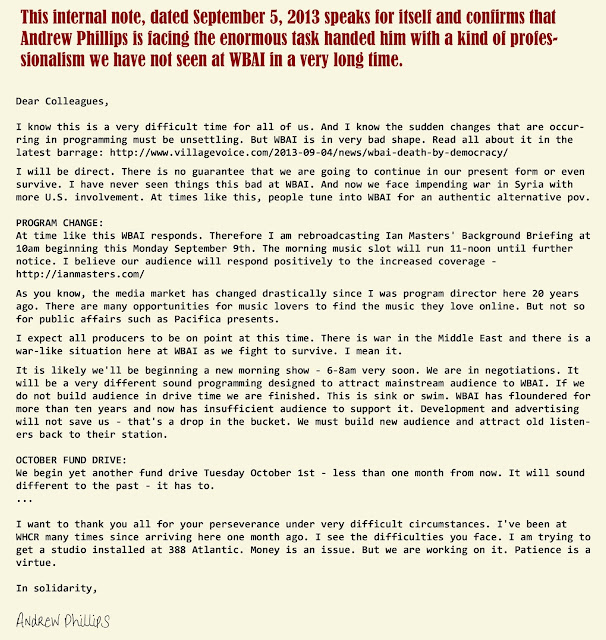 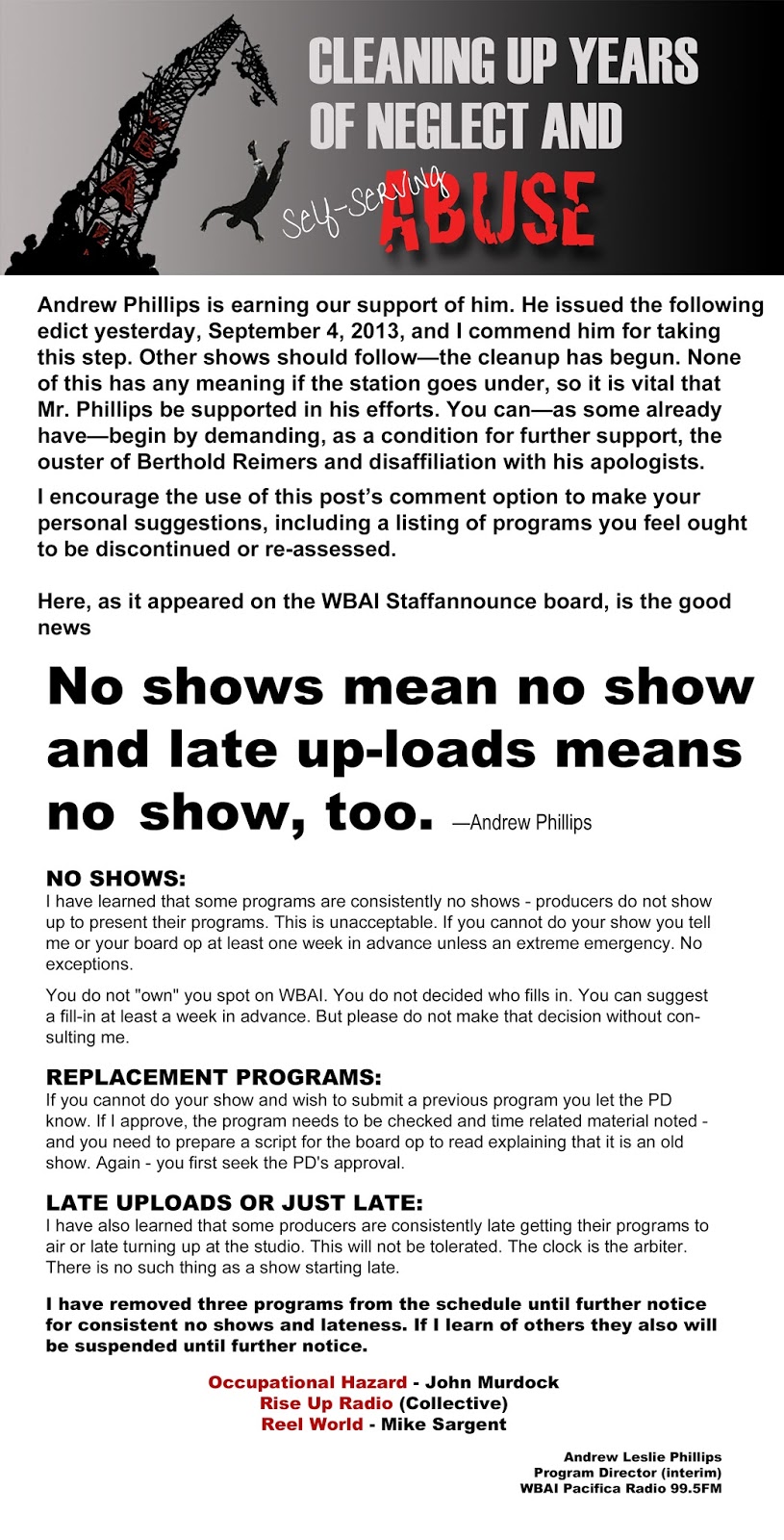 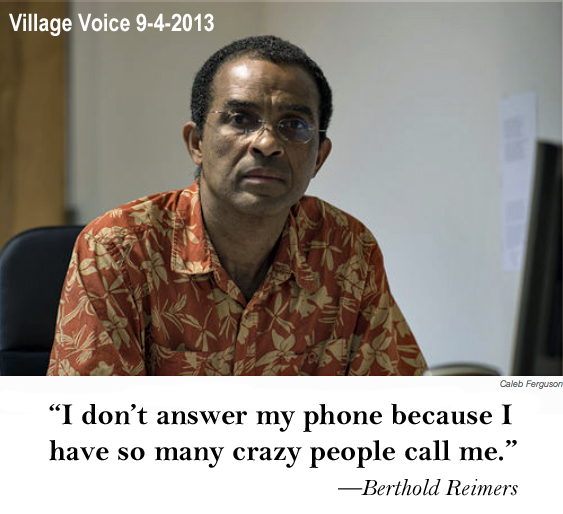 If you would like to read the Village Voice article by Tessa Stuart, here is a link. More on this coming, including a fuming response from Jim Dingeman. Was it something I said?
Posted by Chris Albertson at 11:44 AM 2 comments: